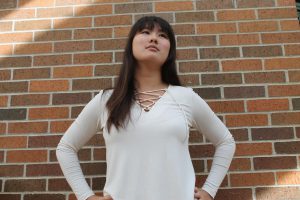 [dropcap]I[/dropcap]t’s a warm fall evening when senior Chloe Fischer hits the pavement for her nightly neighborhood run. As she nears the end of her route, something unsettling, but not completely unexpected, occurs. Three men passing in a car start catcalling her. They unashamedly whistle and yell phrases such as,“Hey, mama.” Naturally, Fischer amps up her pace, unnerved by the older men’s attention. The next time she looks back, she sees the strangers turning around in a driveway, heading back her way. As she reaches her house, the trio passes the top of her street.

After the incident, Fischer and her parents decided to stop her runs in the dark. The threat of another, possibly more severe, encounter was too serious for the family to ignore. Despite this measure to protect herself, Fischer still experiences street harassment. Recently, she had to deal with it while on spring break vacation and at Nationals with a group of her fellow Bruin Girls.

[quote]“It’s a little embarrassing because you don’t want to be called attention to. It’s also scary because, like I said, you feel defenseless, especially when you’re on a run,” Fischer said. “[Catcalling] is not acceptable. Honestly, it’s not acceptable anyway because it makes females, [and] if it happens to males as well, it makes [them] feel uncomfortable in most situations.”[/quote]

While Fischer is just one person with stories of catcalling, data show this behavior is quite common. Eighty-five percent of American women experienced catcalling by age 17, according to the report Street Harassment: The Largest International Cross-Cultural Study by Dr. Beth Livingston and her graduate assistants at the Cornell School of Industrial and Labor Relations.

Dr. Livingston believes it is important to conduct large-scale, statistic-based research, as it’s better for policy making than anecdotal evidence . After analyzing the data from 16,607 respondents, a few trends stood out.

“I did find it interesting that so many women reported their first experiences of catcalling and other street harassment such as stalking, groping, etc., to have begun at so young an age [(13 percent before age 10 and 71 percent from the ages of 11 to 17)],” Dr. Livingston said. “I also find it interesting that the presence of bystanders usually seemed to serve to make a woman’s experience worse instead of better. This was because, most of the time, bystanders witnessed the behavior but did nothing to support the victim. This added ‘insult to injury,’ so to speak.”

Olivia J. Farmer, co-author of the 2017 study Experiences of Women Coping With Catcalling Experiences in New York City: A Pilot Study, wanted to research the topic because of the lack of related information in her field of Marriage & Family Therapy.

“I was most surprised [by]  how women of various diversity groups  (i.e. race, sexual orientation, religious backgrounds) all experienced similar emotions and utilized similar coping methods to deal with harassment behavior in public,” Farmer said. “To me, this meant that regardless of what we learn from our own environments, backgrounds and families about harassment, woman, in general, experience this behavior as problematic.”

Catcalling, as with other types of harassment, is difficult to stop in the moment, as the perpetrators use intimidation as a tool to retain power. Situations often play out similarly to Fischer’s, with the victim trying to ignore the instigators and flee the situation as soon as possible.

[quote]“I think the most important component of ‘dealing with’ catcalling is safety. If choosing to ignore a catcaller allows an individual to get to their destination safely this could be a viable option,” Farmer said. “Some choose to respond and advocate for themselves by vocalizing their disinterest in the catcallers’ behavior. This jeopardizes safety, as the individual is at risk of the catcaller furthering their advances and potentially becoming violent.”[/quote]

For many women, the solution involves avoiding walking alone or dressing a certain way;  however, this doesn’t address the core problem in society.

“As with many gender-related issues, [street harassment] likely has many causes. The one that stands out the most to me is power, particularly as it’s wrapped into something we label ‘toxic masculinity.’ Toxic masculinity . . . prizes a performative type of hypermasculine ethos instead of prizing consideration or communication,” Dr. Livingston said. “Often we’ve seen catcalling and street harassment be about a performance of ‘look how badass I am’ towards other men in the group as opposed to being about the woman and her feelings at all. She becomes a tool who has been stripped of her humanity.”

Looking to the future, Dr. Livingston believes a cultural shift is necessary to improve the quality and safety of encounters on the street.

“Empowering men to own the full spectrum of their emotions, rewarding compassion and consideration to the same degree as we reward competition and aggression, promoting the idea of a global community where bystanders are empowered to speak up for those who are harassed: all of these things will help,” Dr. Livingston said. “But they are also much more difficult than just enacting a law/policy or making a public statement. Culture does not change easily, particularly when people feel defensive about the reasons the changes are needed.”

What are your views on catcalling? Let us know in the comments below.