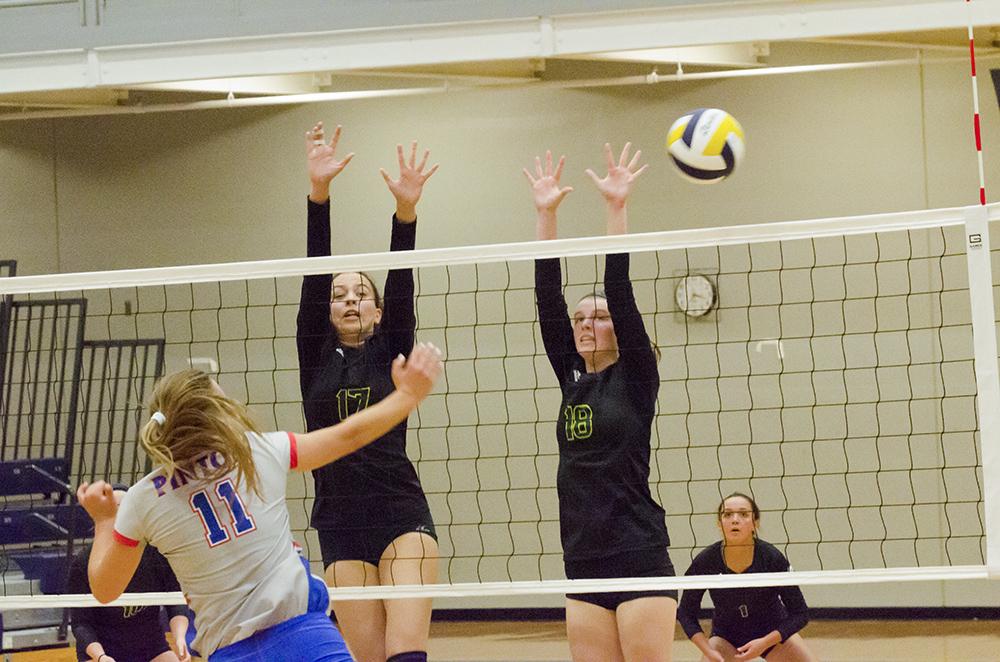 Junior Kennedy Robbins (#17) and sophomore Cassie Gray (#18) jump to block the ball during a match against California High School at the jamboree on August 23, while senior Kate Buster (#1) is poised to pass behind them. Photo by Allie Pigg.

After two close matches at Battle High School (BHS) last night during the annual volleyball jamboree, this year’s varsity team is still finding their rhythm as they prepare for their first season game. The Bruins tied with California High School (25-19, 20-25) and lost to local opponent BHS (24-25, 24-25) because of the jamboree’s 25 point cap.

With a team of 10 players, over half of whom are seniors, head coach Aaron Kincaid said team chemistry is the key component in any successful season.

Blending players of different athletic disciplines and backgrounds presents a challenge for even the best of teams, but junior middle blocker and right side Kennedy Robbins made a nearly seamless transition from the courts of Canada to the gyms of RBHS, quickly became a valued player. Senior defensive specialist Kate Buster said some of her favorite moments from the jamboree were after Robbins was responsible for the team winning a point.

“[Robbins is] our middle blocker and she’s brand new and she’s so good,” Buster said. “She would just smack the ball down and we all would just start like screaming and yelling and looking at each other and she just looks at us with this super sweet face and we’re like, ‘Yes Kennedy’ like yelling at her face and she’s like, ‘Thanks guys.’”

Buster was not the only teammate impressed by Robbins during the jamboree. Team captain, varsity setter and senior Savannah Schnabel, who has played at the varsity level since her freshman year, echoed Buster’s admiration of Robbins’s skill.

“[Robbins is] the only junior on the team and she’s never played with this team before, but she’s gotten single blocks. She’s gotten kills. And every time she goes up and I see that ball just hit the floor, [I know] that I set that ball and she got it down [and] we got a point. It’s just a very energetic feeling seeing that our team is coming together,” Schnabel said. “And seeing that ball hit the floor, it was those moments that were the best. Definitely.”

While the jamboree was full of celebratory moments, it also served as an important learning experience for players and coaches alike. Kincaid said the jamboree allows the coaching staff to “see player and team strengths and focus areas in real match type situations.” He and his fellow staff members then use this information to tailor practices to optimize results.

“We now know what we need to work on,” Kincaid said. “For example, we did not block as well as we can, so that will be a focal point in practices.”

Having a “perfect practice makes perfect” mentality, a quote from Vince Lombardi which Buster loves and applies to her own life, should create a more focused atmosphere for the team during practice.

“We are going to start taking practices more seriously, and if we scrimmage JV in a practice, we’re going to not take it lightly,” Buster said. “We’re going to take it how we should take a real game.”

Kincaid is well aware of the challenges the team faces faces this season, and is determined to devote the necessary time and energy to the program for a winning season. Along with new faces in the Freshman and JV coaching staff this year, Kincaid said they brought “fresh ideas, drills and most importantly passion for Rock Bridge volleyball” to the program.

“Ozark will be the toughest competitor this season as they finished second in State last year and return most of their players,” Kincaid said. “Helias is also another match-up we will have to be very prepared for following their win in State last year.”

With the tests the team faces in their upcoming matches, the strong presence of senior leadership within the program will “ be essential in leading the younger players through their past experiences,” Kincaid said. Through post game discussions among senior leaders and coaches, and a strong sense of community among teammates, the varsity team is poised for a season of success.

Which game are you most looking forward to watching during the regular season?