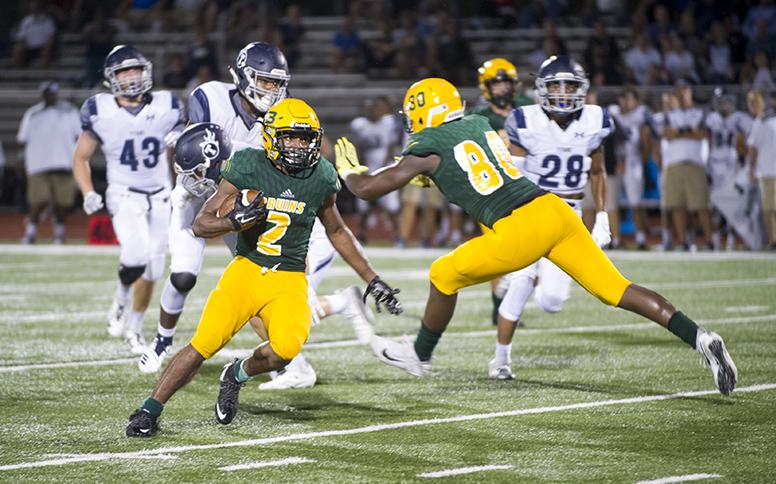 Senior Nate Peat drives the ball through the Titan's defense during Friday night's game Sep 14. Peat receives attention from his coaches and fans for his exceptional talent as an offensive player. He now holds offers from several schools, including University of Missouri, Stanford and Northwestern. Photo by Maya Bell.

As the Bruins warmed up to take on the Lee’s Summit West Titans, the student section filled with neon-clad fans and even one Prince look-alike. BruCrew’s theme of the night was “the 80’s”. Senior leaders tossed glow sticks into the stands for students to wave around.

The second home game of the season kicked off with the dedication of the recently renovated stadium. Thanks to community donors, including the Columbia Chamber of Commerce, RBHS athletes now run and practice on a fresh bright red track and new turf.

At the end of the first quarter, the Bruins trailed behind the Titans (21-0). BruCrew roared, giving a much needed morale booster to the team. A dazzling halftime show from the Emerald Regiment marching band and the Bruin Girls continued to uplift school spirit.

RBHS ultimately fell to Lee’s Summit West (28-7), making the Bruins [2-2] for this season’s wins. Sophomore offensive lineman Mike Brown was proud of the team despite the loss.

“We could have done better, but in the end we all tried our hardest,” Brown said. “Towards the end of the game I didn’t care about the score. I just cared if everyone was doing their job. Our coach tells us to believe in our team and believe in the process so that’s what I’ll do for the rest of the season.”

Next week, the Bruins will face long-time-rival, HHS, in the 2018 Providence Bowl.

Bowling my way to Vietnam

Maya Bell is a senior at RBHS with a love for photography and covering all sorts of topics in journalism. Maya takes part in the Young Artists Philharmonic of the Missouri Symphony Society as the second chair cellist.