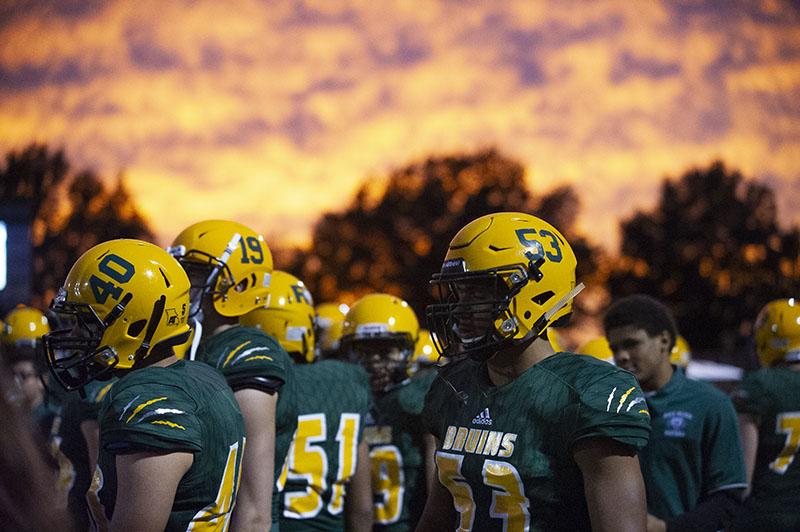 A 7:05 p.m game time and a beautiful sky to set the scene, RBHS took on its cross town rival, the Hickman High School (HHS) Kewpies , in the annual Providence Bowl. Not only was it a huge game, but the pre-game festivities brought much to the atmosphere on the field. Football celebrated its senior night, Bruin Girls welcomed junior dancers in a pre-game performance and Jeff and Gentry Middle School students played alongside Emerald Regiment in the national anthem.

RBHS was the first to score with a touchdown pass by junior quarterback, Grant Hajicek to senior wide receiver Martez Manuel, shifting the momentum into RBHS’ favor, where it would stay for the rest of the game. Junior cornerback Spencer Nivens would intercept a Kewpie’s pass, and return it for a touchdown in the second quarter, securing Rockbridges lead.

As the clocked ticked down at half, RBHS continued to shut down the Kewpies. Senior running back Nathaniel Peat grew restless, and he sensed that the Bruins could lengthen the lead over the Kewpies. His talk with teammates evidently worked, as the team came out of half and continued to score. Junior Sean Hamilton reflected on the energy that the Bruins displayed after the half. RBHS would defeat the Kewpies 31-0, making their record on the season [3-2].

“In the locker room at halftime we knew we weren’t playing our best and we gave ourselves a wake up call” Hamilton said, “We knew we should be winning by much more…it gave us a little boost of energy.”