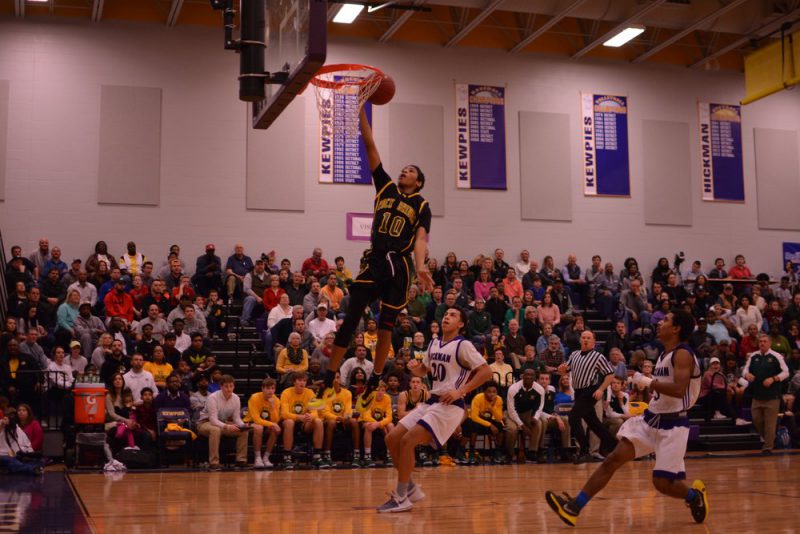 The boys’ basketball team has set the tone for the rest of the season with another dominant win against St. Joseph Lafayette Saturday, Dec. 15. The Bruins came out on top with a 79-47 win, improving to 5-1 on the year.

Coming into the game, junior guard Brant Bowers said he was expecting a much closer game than the one he experienced, but trusts his team can handle whatever comes their way. He credits the teams grit and ability to work hard when others are not.

“After halftime was when there was a defining moment because they came out tired and were walking around,” Bowers said. “They didn’t look like they were ready to fight for another half, so we took advantage of them and hit them in the mouth.”

Senior guard Spencer Miles reciprocated Bowers’ remarks. He is proud of his teammates for attacking at the right times and in the right places.

“Everyone played hard on offense and hard on defense,” Miles said. “The score shows how hard everyone was working as a unit.”

After the win, Bowers is happy for all of his teammates. He recognizes the Bruins’ bond as a team and that they play so selflessly.

“I’m proud after the win,” Bowers said. “Everyone was able to get in and get some solid minutes which was great.”

The Bruins will take the court Tuesday, Dec. 18 to face the Battle High School Spartans for another away game.

“This win helps us a lot for Tuesday’s game,” Miles said. “It primarily helps us with our confidence going into the game because we know we can get the job done against Battle.”

Will you be attending the game at Battle High School on Tuesday? Let us know in the comments below!

Students struggle with over attachment to smartphones