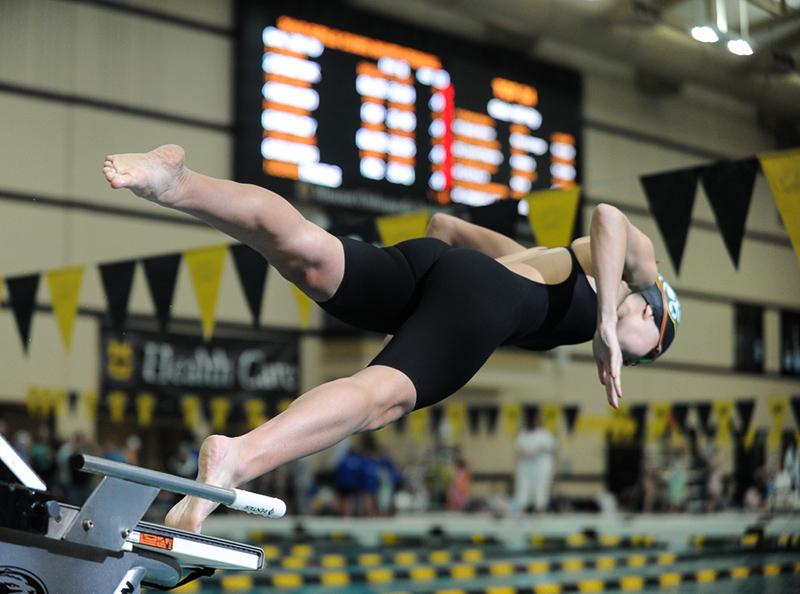 Junior swimmer Piper Osman dives into the pool for the 100 meter fly. “This year has been pretty good for me,” Osman said. “I tried to train a little bit more in the off-season and that’s really helped me out.” Photo by Maya Bell

The RBHS Girls’ swimming and diving team opened its season by competing at the Marquette Relays Dec. 1. Though this is the first meet of the year for the girls, they began preparing for the meet with morning practices and strength training. This is senior Riley Jones’ fourth year on the team, and she said because the team just began its season, everyone has been trying to get into racing shape.

“Those swimmers who compete with [the competitive team] usually miss this meet because they participate in a yearly meet in Indianapolis,” Jones said. “But for everyone else, this is a good way to test our progress from the beginning of the season and get into the racing mentally.”

At the 6 a.m. practices, which take place at HHS, the team has been doing a lot of conditioning and endurance, as well as weightlifting and technique training for tips and turns, Jones said.

“I raced a backstroke relay which is out of the ordinary for me, and I was impressed that I got my turns right,” Jones said. “I also think the seniors who were at this meet including myself did a good job of displaying that sense of team leadership.”

This year, the team has a lot more freshmen and the seniors who graduated last year represented an important part of the team. Jones believes the seniors that took their place, however, have an exceptional sense of team spirit and connection. In the Marquette Relays, the group of 70 people is more broken up as there are 12 relays, with four people from each team per relay. Senior Piper Osman said the relays are what make this meet unique, as there are no individual races.

“We [start practicing] relays this week to make new people more comfortable with the new style of dive,” Osman said. “I honestly didn’t do too much to prepare because I was using this meet more as a warm up for the rest of the season.”

Likewise, Jones said she enjoys this meet because it is very low pressure. She more uses her times to see where she’s at, and see what she needs to work on. Despite the relaxed atmosphere, Jones said she was still a little disappointed with her performance, although she is out of practice. Looking toward the future, Jones said she will definitely be working on turns, body position and distance.

“I’m really excited for this season, especially because it’s my last one,” Jones said. “I think we’ve had a great start and I can’t wait to see how far we go.”

on the topic of oversleeping