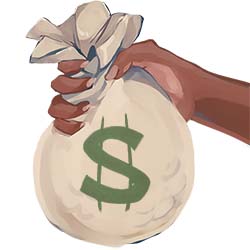 Escaping what senior Jade Brady describes as a bad home life can prove difficult for a teenager because of the lack of finances; therefore, she worked to create an opportunity for herself to leave.

Currently, Brady lives in her own apartment with one other roommate and has been living on her own since late July. While her family members originally objected, their disapproval stopped after they saw she was supporting herself successfully.

For many years, Brady observed her family dealing with money, creating a budget and then used the knowledge gained and searched for the best housing option in her price range. She used to work 25 hours a week, but now has a new job and works about 60 hours a week. Although this hard work can be difficult, Brady says the struggle is worth it.

“The only thing that still labels me as a kid is being in school,” Brady said. “And, yes, I hate that I had to grow up so fast, but I’m a better person because of it.”

While Brady feels sufficient enough with handling and earning enough money on her own, Senior Vice President and Wealth Management Advisor of the Central Trust Company, John Bailey, said there are multiple ways, other than working, to be financially stable.

Bailey says the earlier someone can start investing, the better. He further explained long-term investment success comes from the time in the market and not timing the market.

“It is a great idea for students in high school to begin investing for their financial future,” Bailey said. “However, individuals under age 18 may not establish a brokerage account or mutual fund account on their own.”

If an individual is under 18 years old, a child needs a parent to make a custodial account, Bailey said. The Uniform Gifts to Minors Act places the parent as the owner or custodian, and the young adult can not be in full control of the account until age 21; the funds can then be transferred to an account in the young adult’s name.

Usually, teenage students do not have to concern themselves with rent, phone bills, utilities and food like Brady does daily. Living a more secure lifestyle, on the other hand, is senior Zach Bartman. He considers himself financially comfortable because of his dad who created and sold an ethanol company and land in Illinois that they rent out.

Bartman recognizes how fortunate he is to be able to travel to many states and visit entertainment parks such as Disney World. Most of all, he understands that paying for college will not be as big a concern.
Brady, however, worries about her future after high school because the extra stress of earning money makes juggling school work too burdensome. At RBHS, she had a full schedule of eight classes, and at Douglass High School Brady took two.

“I actually just left RBHS to go to Douglass,” Brady said. “At Douglass I am a part of the MO options program. It helps students who wouldn’t usually graduate on time graduate early.”

In January, Brady will start four classes at the Moberly Area Community College. Brady’s biggest stressor is money, but plans to save so she can attend college. This worry is not without cause as Forbes.com states in the United States, there are more than 44 million borrowers who together, owe $1.5 trillion in student loan debt.

To combat this, teenagers like Brady can use money management tips to reach their goals; one example is establishing a checking account to allow easy access to their money.

“[Teenagers can] create and maintain a budget to accurately track income and expenses. [Also] separate needs from wants [which] seems easy enough, but many people struggle with this,” Bailey said. “[Make sure to] protect yourself from identity theft by being careful with your money, protecting your smartphone and not oversharing on social media. When you begin using credit, do so wisely to build a good credit history.”

Atiyah and Jordyn’s resolutions for 2019