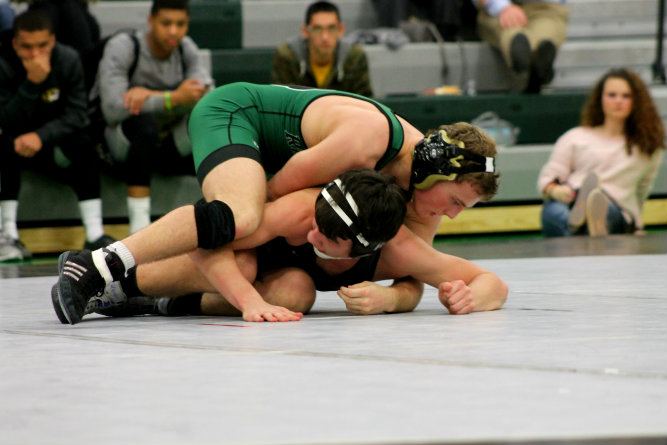 Today and tomorrow members of the wrestling team will participate in the Lee’s Summit Christmas Invite. The team stands at a [4-2] season record.

Sophomore Garrett Roach, a 132 lb level wrestler, is approaching his second year on the team although this is his first year as a varsity athlete. The invite is open to varsity athletes only, and Roach said he’s excited to be able to compare himself to the best players from his weight class from each participating school.

“I really wanna work on my endurance and really just [work] on my wrestling because I have technique, but I’m working on trying to apply it,” Roach said. “It’s only my second year of wrestling and so I have little knowledge on actually the application of those techniques so I’m really just trying to build up the endurance and [build] up the experience.”

A veteran varsity member who finished third at the Ft. Zumwalt North Tournament Dec. 1, junior Evan Diehls, also plans to improve before traveling to Lee’s Summit. Although Diehls said it’s been a good year so far, he said he took a loss after a tight match at Ft. Zumwalt North to an opponent from Lindbergh High School. To prepare himself for the Christmas Invite, he plans to work on his bottom wrestling, getting out and scoring points early.

“I think we’ve gotta improve a lot this week,” Diehls said, who wrestles at the 113 lb level. “It’s gonna be a really tough tournament, a lot of good kids, but I think we’ll have some guys do well.”

Watkins said the wrestling team is a lot more adept than he expected it to be as he came in, which makes his first year coaching the RBHS wrestling team easier. A part of wrestling, however, is constantly learning new techniques.

“It’s tough for a lot of kids that had previous success, but at the same time, last year’s success is last year,” Watkins said. “You have to build new going forward, and that’s kind of uncomfortable for experienced wrestlers.”

This is Watkins’ first season with RBHS, so he doesn’t have much experience with high school tournaments, but he plans to prepare the athletes the same way he’s been preparing them for every game.

“Technique is first and foremost, conditioning second,” Watkins said. “You gotta simulate as much as possible tough matches in practice so when we act literally how it’s gonna feel here, they’re gonna be golden when they get there.”

I don’t know a lot about wrestling, so this was a good article to learn more. It seems really challenging since there’s so much contact.

Wrestling seems like it’d be really hard. Glad some people are able to do it bc I sure can’t.