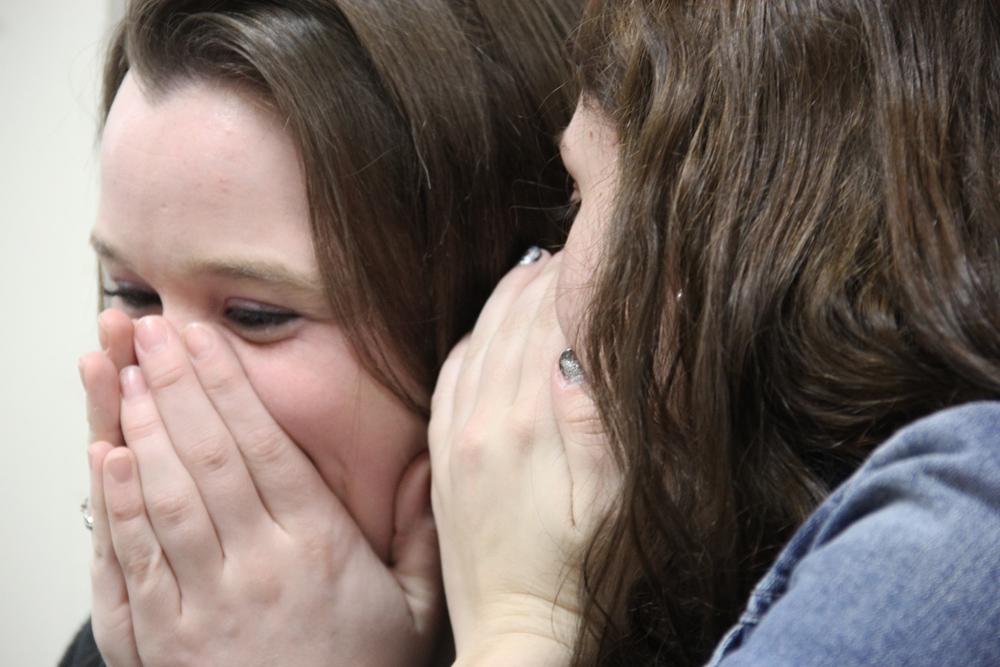 Raised by parents from South Sudan, freshman Mabior Akuiem grew up in Kenya before moving to the U.S. in 2015. From folk tales about how a mustache became stuck on a person’s face to his father’s life story, Akuiem absorbed the world around him and processed it in his own way, allowing the experiences and morals he heard to shape him.

“Most of [the tales I grew up with] were talking about the future, like how growing up is hard and everything,” Akuiem said, “and how life can be hard when family is not there and how you should always rely on the family and people you love.”

Megan McKinstry, an Associate Teaching Professor of German at the University of Missouri—Columbia (UMC), believes in the psychological power of stories. While she said the narratives children hear growing up have tremendous influence on their moral compass, the continuous evolution of tales can lead to a chicken and egg dilemma regarding how tales during youth affect one’s morality.

“Do the stories reflect the zeitgeist of a certain cultural moment, or do they create that cultural moment?” McKinstry said. “I suspect the answer is ‘both.’”

During his time in Kenya, Akuiem noticed everyone in his neighborhood worked together, and parents would treat every child equally. The lack of favoritism he experienced in his community taught him to treat others with the same respect and kindness, regardless of how well he knew them. Akuiem said the lessons his community taught him and the variety of information he absorbed improved the person he is today.

He believes the lessons he learned made him more thoughtful and conscious than he would have otherwise been. Rather than jumping headfirst into a decision, he carefully considers the pros and cons, weighing his options and reflecting on how his choices will impact himself and those around him. While he believes some people are “just born nice to help each other,” Akuiem also said others “were not born nice and then they create themselves” by paying attention to the world and to the people around them.

“Those stories really made a difference ‘cause … every story that [I was] told always ends about being nice to each other and helping each other out. And after you hear those over and over and over you feel like if you help each other, maybe their life will be better every time and they’ll help you next time if you have a problem.”

Community exists not only at a local scale, but on a global one, as well. Political, religious and social beliefs can influence the course of nations and drastically impact the world in which parents raise their children. For better or for worse, the culture one is exposed to during youth can impact the person he or she becomes later in life.

Growing up in Germany in the 1960s and 1970s, Dr. Monika Fischer, a professor of German & Russian Studies at the UMC, was raised in a time of social upheaval. Unlike those before her who the Catholic church greatly influenced, Dr. Fischer said her generation “turned away from the authoritarian, patriarchal church structures.” In German and Russian folklore, fairy tales and childrens’ stories, Dr. Fischer said “genderized messages” are a common theme, especially in more antiquated and traditional tellings of a tale.

“Girls stay home and take care of men and children and are chaste and obedient to men; men go out and have adventures,” Dr. Fischer said. “You can see a good example of a feminist retelling of a fairytale by Angela Carter [in] The Donkey Prince or Oscar Wilde’s The Happy Prince. These are tales reflecting and questioning societal norms. Oral tales have no known author and are much older thus reflecting older societies.”

As German society changes, McKinstry said parents now are less worried about “sparing the rod and spoiling the child” like those in earlier generations. One difference between German and American society, McKinstry notes, is German parents tend to hover less than American parents and focus more on guiding their children toward independence. With today’s global market, traditional tales can be translated from language to language and adapted to fit another culture, allowing children from around the world to share the same favorite books.

“In general, I would say that German parents do tend to be less worried about prettifying stories for children than Americans,” McKinstry said. “This becomes most apparent when you compare their Grimm’s fairy tales with our Disney-fied, princess-ified versions. They are more likely to believe that their children can handle it. But the days of using stories to frighten children are long gone, and German parents are really quite gentle these days.”

An avid reader from an early age, junior Faith Koo grew up experiencing the world through the combined lens of American and Korean culture. Still, some of the narratives she heard as a child were similar no matter what language they were told in, like the tale of Cinderella where the heroine must perform three seemingly impossible tasks before she is able to attend the ball.

“We have a set of Korean books at home. I’d ask my parents to read because I am not fluent in reading Korean. But as in for English since they’re both Korean, my dad speaks English and he’s a professor at MU so he has to read and stuff like that, but my mom doesn’t speak any English or read any English at all, so I read a lot of English books on my own time.”

Mischievous animals in Korean literature, like a disobedient frog who would not listen to his mother’s wishes, helped to teach children about how the world works by explaining why frogs croak in the rain or why sparrows hop, much like author Rudyard Kipling’s array of explanatory children’s stories. Regardless of a tale’s language or culture of origin, tales oftentimes seek to explain the world in a way children can easily comprehend. Koo also recalled recognizing the repetition of characters in both English and Korean culture. Evil authority figures, like a king or a sato (사토), “clever little people,” both children and “shortie” adults, as well as virtuous, hard working people filled the pages of storybooks throughout her youth.

“I never paid attention to the morals. Like, Grimm’s fairy tales, it’s very obvious. Don’t eat stuff that people give you if you don’t know them. Like Snow White, she eats an apple and then—bam, she’s in a coma because she trusted this one old lady that she thought was nice. I guess [there are] virtues in the stories,” Koo said. “[So in the frog story], more than just Why Frogs Croak in the Rain it’s more telling you to pay attention to your parents and follow what they say because if they die you’re going to be forever burying their bodies. It’s like the same morals: Don’t lie, don’t cheat, don’t steal, don’t murder or else you’re going to die.”

Along with the lessons, children’s tales teach the youth of a generation. A country’s own history acts as a tale in its own right and can shape a child’s ideologies and understanding of right and wrong based on the model of the world he or she grows up around. Nationalism and patriotism, Dr. Fischer said, as well as the tales of heroes, politicians and military feats help to shape one’s allegiance to a place. Germany’s past taught balanced governments with a multi-party system and independent media are necessary to maintain a balance of power.

“In the case of patriotism, it is positive and inclusory and simply pride in one’s homeland. Nationalism excludes, creates enemies and hierarchies and feeds on fear and negative views of the ‘other,’” Dr. Fischer said. “Folktales focusing on regions and ways of life can create a feeling of belonging that does not create hierarchies of which culture is better but celebrates what is.”

The stories a nation hears, especially those a country’s youth is exposed to, have the power to shape that region’s future. The former East in Germany, McKinstry said, represents an “interesting cultural experiment” since a goal of the socialist government was to control the narratives’ children and adults heard. If the government did this under the belief it could influence future generations and make them “naturally be better socialists.” McKinstry said these tales taught discipline and generosity and encouraged community-minded values. Stories can also take the form of stereotypes, ones that are often difficult to dismantle once they solidify, by depicting something or someone as inhuman or playing into pre-existing assumptions about a certain group of people, McKinstry and Dr. Fischer said.

“We’re always trying to make sense of the world as we experience it, and we wish [that] consistent rules would apply,” McKinstry said. “When they don’t exist, we make them up.”

By experiencing a combination of American and Korean culture, Koo said she, and others in similar situations, are potentially more open-minded and accepting of ambiguity in the world than others who may have only been exposed to one culture during their youth. At the same time, Koo said she feels like a person raised in multiple cultures is not accepted fully by either one. Reared on a combination of morals from collections such as Aesop’s Fables, Hans Christian Andersen’s books, and the Grimm’s Fairy Tales as well as traditional Korean legends, Koo improved her understanding of the differences in behaviors and cultural politenesses present in American and Korean society.

“Plato had this idea of there’s a bunch of horses on the earth, [so he philosophized that] outside of this earth there must be the perfect creature horse, like this perfect horse, from which all horses are derived from,” Koo said. “So I guess like if you think about it, there’s like this one central, perfect story and then different cultures interpret that story. And I think that I just learned more than one side of it.”

Through Akuiem’s experience in Kenya and America and his exposure to such diverse arrays of cultures, traditions and languages, he recognizes that while people may appear to act the same, they are unique and different in their own ways. Akuiem sees people on a wide spectrum of “nice” and “mean,” and he accepts that no two people can ever be exactly the same.

“[Reading and hearing stories] makes me understand how the world works … understand other cultures … understand the other part of people, like to understand when someone’s saying something [it helps me] to understand, try to understand it on her or his perspective,” Akuiem said. “And it made me kind of nice and kind to everyone, try to treat everyone the same, like how I would like to be treated.”

What fairytales did you grow up hearing? Let us know in the comments below!

Behind the Scenes: Inside look with True/False staff