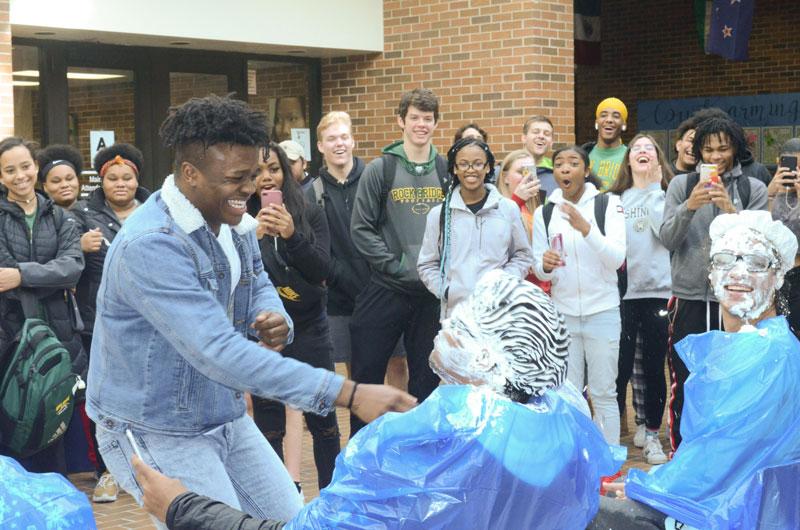 by Ann FitzmauriceFebruary 13, 2019February 14, 20192 644
Share0
During both lunches today, RBHS Student Council hosted a “pie the kings” activity in the main commons. Students could pay $1 to throw aluminum pie tins filled with whipped cream at the Courtwarming King candidates with the proceeds benefiting the Rainbow House, a child advocacy center.

Toward the end of A lunch, however, assistant principal Dr. Darlene Grant shut down the activity as students became too rough with their throws and began hurting the kings. The throwing resulted in minor injuries for senior Bennett Lawson’s gum, Kai Ford’s nose and Liam Peck who got a swollen eye from the plate of whipped cream hitting his goggles.

“I don’t think [the pie throwing] went too far, per se,” Peck said. “I think people were just having fun and got a little carried away with it.”

Peck said the pie throwing itself didn’t hurt and doesn’t regret participating in the charity event. Before candidates were injured, Student Council member Julia LaHue said the intent of the activity was to raise money for the Rainbow House and get students involved in and excited about courtwarming week.

“Dr. Grant shut down the activity once a king got injured and deemed the hits too hard,” LaHue said. “A particular student was getting aggressive about the pie to the face and how hard they were hitting.”

Immediately after Dr. Grant stopped the activity, Student Council members assessed the condition of the king candidates and helped them clean up while making sure they were okay, LaHue said. Administration allowed the pie activity to continue during B lunch as long as the hits calmed down, LaHue said.

During the second round activity with four new kings, LaHue and another Student Council member, junior Morgan Boussad, made sure to explain to each person who paid to pie a king the rules about throwing the pies softly. Before B lunch began, LaHue also made sure to outline what needed to change.

“[During B Lunch] the severity of the hits will be drastically different. The student that was too intense will be disqualified, and now the students can gently pie the kings or throw the pie from a few feet [away],” LaHue said. “Also we are switched to paper plates instead of tins.”

Although he always supervises B lunch, assistant principal David Egan made sure he had a presence around the activity because of the injuries during A lunch.
“I want to make sure I have a presence here specifically,” Egan said. “It was my understanding that a few participants took it a little too far and got very aggressive with how they were administering the pie in the face. I’m here to make sure it doesn’t go too far.”

Despite the injuries during A lunch, Student Council retained the original goal of the activity in the first place: to raise money for charity. The first shift raised about $60 for the Rainbow House, and the second, with a smaller turnout, raised $15, making the gross amount raised around $75. Because of the result, Peck said he doesn’t regret participating.
“I had fun, I’m pretty sure the rest of the kings did, too, and obviously the people throwing pies did, as well,” Peck said. “I know there was a little bit of worry about how hard [the pies] were being thrown but I didn’t really have any problem with it. The money was going to charity, and everyone was [having] fun, so having it continue was fine.”

What did you think of the pie throwing?

Girls’ swim and dive to compete at State Championship

Although the event may have ended in some injury, it was for a great cause and I’m so glad that students got involved and donated. I don’t think it should have been as violent as it was but the idea was fun and I hope Student Council can make the event safer and we can do it again!

It’s so sad that people were purposely trying to hurt the kings, but It’s good that there weren’t any serious injuries…I hope they had fun though!