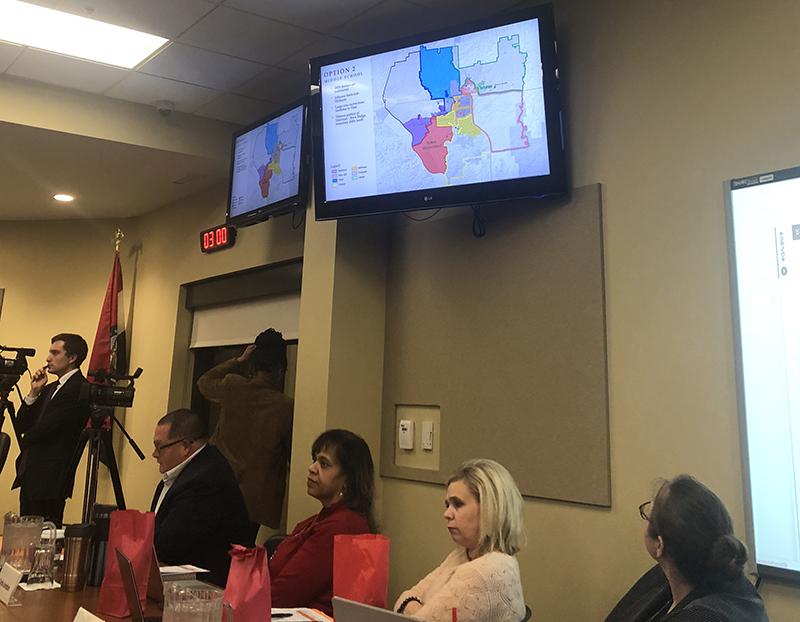 Although still nearly two years in advance, with the addition of a new middle school to take place in the 2020-21 school year, redistricting attendance areas is top priority for the school board, according to RBHS principal Dr. Jennifer Rukstad.

The school board voted  Feb. 11, 6-1, in confirmation of the slightly modified Option 2 plan after comments from the public in both strong affirmation and negation toward it.

Another implementation plan regarding the transferring procedures and transportation passed, as well.

Chief Operations Officer Randall Gooch estimates the cost of the transfer policy will be $200,000.

“We have given the community time to be involved in the process, to adjust and be prepared for implementation,” Gooch said. “Throughout the process, the work and the method and the cooperative strategies have been praised by the many stakeholders through the different events. This is a process that they’ve used throughout the nation. It has proved to be solid.”

Current high schoolers are free to remain at their school for the remainder of their four years. Affected rising freshmen, however, must make a choice. They can either go to one school for their freshman year and transfer their sophomore year or go to their new high school a year early.

Freshman Braeden Songer lives closer to RBHS, but his neighborhood will redistrict to Hickman. Songer has a brother in eighth grade who will eventually transfer to Hickman, something he feels would be extremely inconvenient.

“We would have to have both [of] my parents go in different ways,” Songer said, “and they work at the same place so they will have to travel a lot more.”

Because the decision passed, Songer said his family plans to move to avoid the impending change.

“We will probably move and find a place that is still in the RBHS district, so my brother can still be with his friends and stuff,” Songer said. “We were kind of going to move anyway, but this made it faster.”

Dr. Jennifer Rukstad, RBHS principal, said redistricting is always a contentious time for the community; however, it is necessary. Currently, RBHS is overpopulated and next year the projection shows the addition of 100 students.

“The process is a really emotional process for the community because people have identities with their high schools,” Dr. Rukstad said. “Our buildings have a capacity. Numbers alone, we have to redistrict because the city doesn’t always grow in a nice, distributed fashion.”

Besides separating siblings between schools, there are other controversies related to the redistricting plan. While Option 2 received a 64 percent positive feedback overall, there was still a 27 percent disapproval rate and more than half of those said they “strongly disapproved.”

The least approval came from Battle High School. Before the vote, some Battle administrators, teachers and students expressed concerns to the free and reduced lunch rate. According to Option 2, Battle High School’s free and reduced lunch population would raise from 54 percent to 55 percent whereas in RBHS, this rate would drop from 24 percent to 18 percent.

The socio-economic imbalance disturbs RBHS sophomore Shruti Gautam; she said the disparity among high schools is unfair and disagrees with the redistricting plan.

“If you have too many of the high status in one school, that school is going to get most of the funds and see most of the changes,” Gautam said. “The entire purpose of redistricting is to have some sort of equity, and if you get rid of that, then what’s the point?

Redistricting called for other changes to RBHS, Rukstad said. One of the most dramatic changes involves Jefferson Middle School as students will filter to Hickman, not RBHS, and it will abandon its traditional school structure.

“Jeff[erson Middle School] is going to be a magnet or what they call a lottery school,” Dr. Rukstad said. “There will be a portion of Jeff that is a neighborhood school.”

Although Gautam does not support some aspects of the plan, she said it’s impossible to please everyone, and families should still play along even if it means switching schools.

“My sisters are going to have to go to [the new] middle school instead of Gentry even though my parents want them to go to Gentry,” Gautam said. “But you have to respect the district’s decisions because they can’t just look out for one individual. They are trying to do the best for the whole.”

Redistricting has and will continue to take place, Dr. Rukstad said. She remembers in 2000 when RBHS added floor space to alleviate then overcrowded Hickman. In 2013, with the addition of Battle High School came another round of redistricting as junior high schools and middle schools restructured to six middle schools that would feed into three high schools. Now, with a new middle school for 2020, redistricting is once again inevitable.

“Our city keeps growing and changing,” Dr. Rukstad said. “You have to react and predict what the growth will be in order to keep your buildings from being underutilized or overutilized. That’s the main reason we redistrict.”