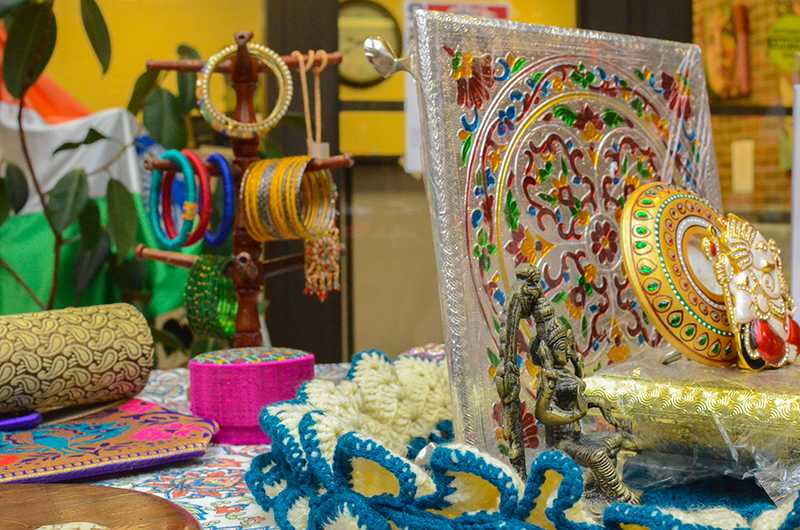 RBHS held its annual Global Village celebration Friday, Feb. 22. The two-hour event was a culmination of a week of cultural exhibitions, which included three group dances and a fashion show where students modeled colorful clothing from countries ranging from Bangladesh to the Ivory Coast.

Students who had experienced Global Village before waited in anticipation for the popular event, while freshmen approached it with curious interest. Freshman Genny Harline eagerly partook in the celebration.

“It’s really fun, and I really like all the different foods and everything,” Harline said. “It’s just really a good experience and [students] both have fun and get to also learn about other things. I think it’s really cool because Rock Bridge [is] like a big old festival.”

Japanese teacher Shawn Beatty has worked at RBHS for seven years and is no stranger to Global Village. Many of his students participate independently or as part of his Japanese club. Beatty, who lived in Japan on and off for eight years, believes Global Village is a fantastic opportunity to expose students to cultures they would not learn about otherwise.

…[G]enerally speaking… we have a very narrow experience. . .especially in the Midwest where it’s really hard to get out,” Beatty said. “I think it’s good to have people try things from other countries; there are a lot of assumptions that are made and 99 percent of all issues, I think, that come up are a result of miscommunication.

Junior Anna Kirby helped contribute to the breaking down of these barriers by running one of the 32 booths at Global Village. Kirby participated in the celebration as part of her Advanced Placement Spanish class, representing North Spain. Her group served patata tortilla, a Spanish dish that incorporates potato and egg as well as virgin sangria. Although the booth was an assignment for the class, she enjoyed the experience and plans to do it again next year.

“I think having events like Global Village is important because it… give[s] people a look [at]… where people… in Rock Bridge come from; because Rock Bridge is actually a lot more diverse, I think, [than] some people think,” Kirby said. “And you get to know more than just like, ‘Oh, they speak a different language’ or ‘Oh, they have a different skin color. They look different than me.’ It’s like, ‘They have different foods. They have a whole different world and culture.'”

Beatty echoed Kirby’s sentiment, emphasizing the value of teaching students about other countries’ lifestyles. Because of Beatty’s extensive exposure to a society very different from the United States, he is especially aware of the unique opportunity Global Village provides to increase cross-cultural understanding. He emphasized that learning about other countries would help foster a dialogue that may be difficult to have otherwise.

“I think because of our current political situation, people are hypersensitive on both ends, so it makes it hard to have some of these conversations,” Beatty said. “A cultural question [may sound] like it’s insensitive, like ‘Why do you eat that?’… or ‘Why do you have the red dot if you’re Indian; what does that mean?’ I think there’s a lot of that that doesn’t happen because if I say something wrong in the phrasing of my question, then people jump down your throat. [Global Village] is a good chance to ask those questions a little bit, and I think we need to do more of that.”

What culture did you learn about at Global Village? Let us know in the comments below.

Global Village is such a unique, beautiful event that Rock Bridge holds. I’m so proud to be a part of such a diverse, welcoming, and inspiring community of students who are open to understanding different cultures! I love this day every year and I can’t wait for it again!

First of all, I have to say that the pictures in this article are amazing! The colors are so bright and pop out; it’s really gorgeous! Anyways I really agree with the Japanese teacher Shawn Beatty; Global Village is a great opportunity for people to be exposed to other cultures. Even if you did something you didn’t really enjoy, like eating a brand new food that you didn’t enjoy, for example, you can still tell people that you had the experience!