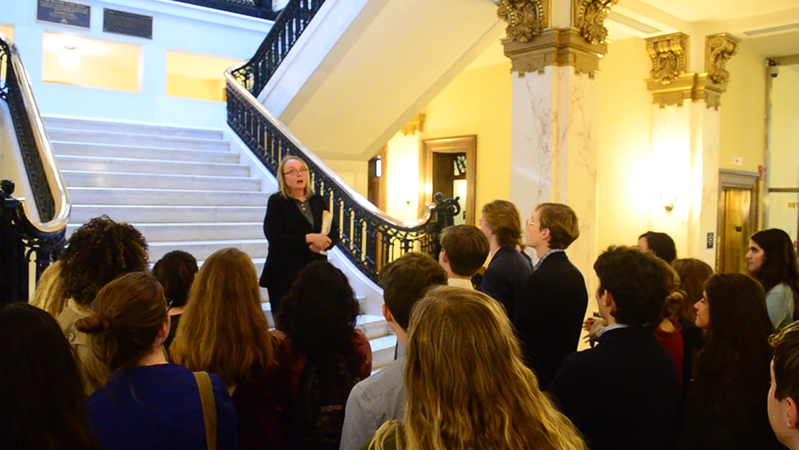 Wednesday, Feb. 26 RBHS students took a trip to Jefferson City, MO, to tour the state Capitol. Although many of the students experienced this trip before, they were still fascinated and excited to learn new information about Missouri’s government.

Sophomore Garrett Roach has gone on the tour four times since elementary school, but despite his experience, he is still absorbed into learning new facts about Missouri’s government and history.

“One thing I had never done at the Capitol building is go to the whisper hall,” Roach says. “It’s the highest level of the building and it’s dome, so if you talk into the wall, a person on the other side of the room can hear it clearly. It was pretty interesting.”

Students weren’t able to meet the Governor Mike Parson or Senator Caleb Rowden as planned, but they were still able to tour the offices and learn the history of Missouri.

Even though she didn’t have the chance to meet the Governor, senior Emma Gysbers still had the chance to visit his office, where she learned her favorite fact about the Capitol.

“My favorite fact is that the portrait of Mark Twain in the Governor’s office,” Gysbers says. “It used to show him holding a cigar but someone decided it was a bad example for a famous children’s author so they painted a spyglass over it.”

Gysbers also said she got an awesome in-depth explanation of the mural in the smoking, now non-smoking,lounge which depicted scenes from all over Missouri. Gysbers also learned a lot about the history of Missouri’s Capitol and Supreme Court.

On the tour, students to sit in on the house discussion of the heartbeat detection bill, listening to the debate about abortion. Sophomore Hannah Juengermann was engrossed in hearing all sides of the discussion and witnessing it in person.

“It was so interesting to get to hear all the different sides and be able to to see it in person.” Juengermann said.

Roach said visiting the Capitol was a great experience for students because the building is open to the public and there is a lot to learn about Missouri government and history.

“One of my favorite parts of doing stuff like [visiting the Capitol] is that it really shows you that these high up people that are doing really amazing things are really just normal people,” Roach said. Students such as Roach who is into politics said touring the Capitol and Supreme Court was a great experience for RBHS students, and they encourage everyone to take time out and visit.

Songs that are so chill, you may need a coat