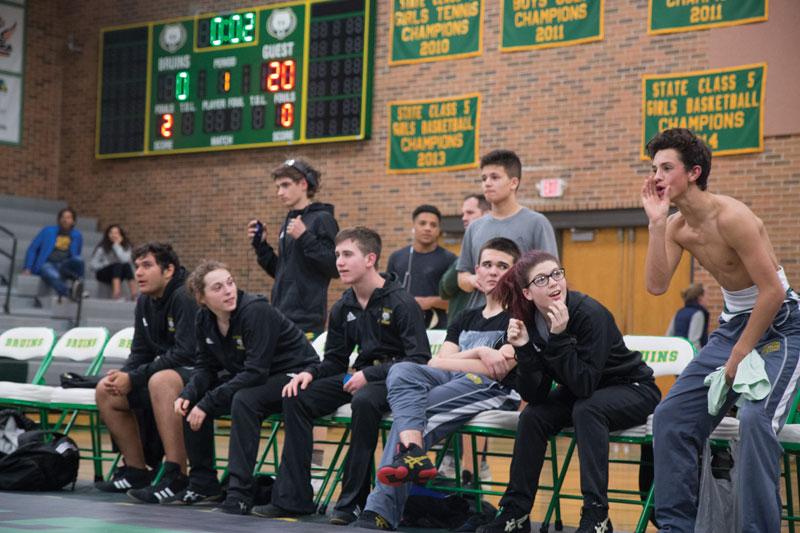 Title IX was passed in 1972 by Congress with the intent to provide equal opportunities to both sexes in educational programs receiving federal financial assistance. Today, RBHS athletics has continued to improve their equity by adding girls’ wrestling, separate from boys’. For athletics, several women-exclusive sports have been made to keep up with the number of men in big teams like those for football and wrestling or else said mens’ sports could face their roster limit being cut down. In 2018, Missouri State Activities Association (MSHSAA) member wrestling schools voted to separate boys’ and girls’ wrestling into different entities in an effort to keep up with the large number of male participants in sports.

As a newly inducted sport, girls’ wrestling will have a two-year transition period. This plan includes girls’ participation in the boys’ and girls’ wrestling lineup during regular season matches. The 2018-19 school year is also the first year girls’ wrestling competed as a separate sport at state.

Principal Dr. Jennifer Rukstad is aware Title IX mandates opportunities should be equal for both boys and girls. In faith to the law, MSHSAA keeps track of the gender ratio for students participating in sports in the state of Missouri.

“There is one big factor that changes things, which is football, because football rosters are relatively large compared to others sports,” Dr. Rukstad said. “That’s why most colleges and universities have more girl sports than boy sports. [RBHS and] MSHSAA [have] more girl sports than boy sports because we are constantly monitoring where are we to get closer to being equitable. There has already been girls’ wrestling. Girls have been wrestling with boys or other girls, depending on who is on the other team for many years.”

This school year, RBHS welcomed two new female wrestlers, making it junior Paige Hensley’s first year wrestling. She always wanted to join but only jumped at the chance when the girls’ team began.

“I think it’s so important to balance the sports with gender because no matter what, if a girl really wants to do something, she will,” Hensley said. “It makes school 10 times more difficult if girls are worried about what a guy thinks about her, but before high school I never even thought about wrestling but now looking at it I have a second family behind me, people I never thought I would talk to on an everyday basis, and I’ve enjoyed every second of it.”

“I think it’s so important to balance the sports with gender because no matter what, if a girl really wants to do something, she will,” -Paige Hensley, junior

Since there are only two girls on the team, both male and female wrestlers train together under the same coaching staff. During practice, gender does not matter, and instead it is the weight class that defines who is paired with which athlete. Freshman Anna Stephens would love if more girls joined the Bruins but ultimately believes gender doesn’t define her place on the team.

“If we get [more] girls, I want them to practice with the boys so they can learn how to be aggressive and build up muscle so our team can kick some butt out on the mat,” Stephens said. “Even if we had more girls, I would have the coach train us like how he or she would train the guys.”

Watkins said the first step one can take is go to a wrestling practice, introduce themselves to the coach and watch a full practice to see if there’s any interest.

“We have four coaches. All of us will be involved with our girls’ development. They are wrestlers, [and] gender doesn’t matter in our room,” Watkins said. “They run, lift, drill, practice and compete the same as the boys.”

In the future if more girls join the team, Hensley sees benefits, such as the shot of winning in the Tri Dual against Battle High School and Hickman High School, but also a change in dynamics.

“If we had more [girls], it would be a whole new environment. I got close with all of the guys on the team because there were only two of us,” Hensley said. “If there were a lot of us, I feel the teams would separate, and we would be looked on differently.”

As one of the first female wrestlers at RBHS, Stephens encourages more to try out. She said to come in and learn the moves and, most importantly, have fun. While she knows not everyone will enjoy it, it can’t hurt to try.

“Be yourself [and] don’t listen to people saying provocative names about [girls doing wrestling],” Stephens said. “Just try it out and if you don’t like it, it’s ok, but if you do, then go through the season and don’t quit just cause it may be hard at first or your first year may suck; just push through it and keep telling yourself you can do it.”

What do you think of gendered wrestling?

The first time I drove a car