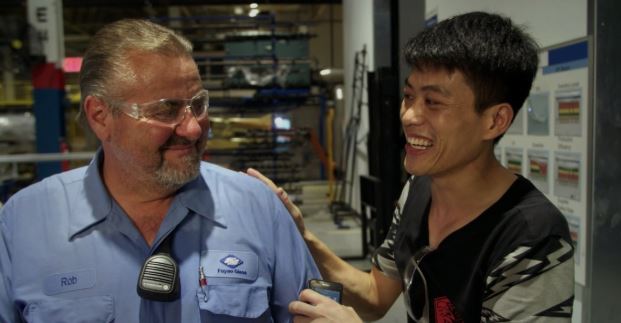 The film ‘American Factory’ portrays the clash of culture between the manufacturing style of China and the working class of America. The CEO of Fuyao, a Chinese glass manufacturing company, takes a risk by creating a factory from the foundations of an old General Motors factory that closed in 2008. The film shows as many sides of the situation as possible, not a stone is left unturned. We see the factory grow from the optimistic roots of Cao Dewang, who is appreciative of American culture, but still misunderstands some aspects of American life and exertion. The Chinese labor style and efficiency is lost in translation to the American workers, which leads to the main conflict of the film: unionization from a large subsection of the workers. The conflict grows until voting day, which serves as a climax for the film.

While the title of the film is ‘American Factory,’ what the documentary is really centered around is the relationship between American and Chinese workers. Parts of the glass manufacturing process are shown throughout the film, but it is never fully documented. The backdrop does make for some very interesting clips. Factories have always intrigued me because they shows how everyday objects are created. Something such as glass manufacturing has never entered my mind before this documentary, so that within itself is something special.

I thought most aspects of the film were extremely interesting. No one in the film was shown as an enemy or despicable person. I actually thought Cao Dewang was one of the most likable people in the film, albeit a little misguided. He wanted the factory to run just like the extremely productive ones in China, where workers had longer hours and less breaks. The American workers were not ready for that level of efficiency, which slowly led to the demotion and firing of upper American managers at the factory. Nobody is portrayed as a shoddy businessman or unpleasant person because most of the conflict is entirely centered around the clash of business practices. The Chinese workers cooperate with the American workers very well, and they exchange knowledge and amusing scenes throughout the movie.

While the documentary does have many comical scenes sprouting from interactions between the different workers, I found the film to be more thought provoking than anything else. The dichotomy between the upper management and lower class Americans is one that is just filled to the brim with interesting talking points about the difference in culture and work ethic between the two countries. The upper management discussions about American unions was something that I have never seen realistically shown before in film. Most companies would shut their doors to a documentary crew, but not Fuyao, which shows a level of honesty and transparency that is once again a difference between American and Chinese business practices.

Watching with an American audience was also part of the experience. I could hear disapproving noises from the crowd whenever a Chinese worker said they were better than the Americans. By all intensive purposes, the man was talking about productivity, which he was right about. Some audience members didn’t see this difference. I found it provocative how the culture clash throughout the film was also visible in the crowd that was watching it. The world still has a ways to go when it comes to integration and acceptance of other cultures. It’s one thing to admire another country, but a whole other ordeal to converse with them.

The documentary thoughtfully shows the range of human interaction and how people’s roots and livelihoods affect them differently. Some workers just want the security of the job, while others want to be treated fairly as well.

The documentary widens the worldview of the observer and contrasts the different voices and communities in the factories. The film ends on a somber note, leaving the viewer to come up with his or her own conclusions of the different factions.

‘American Factory’ probably shouldn’t have ended any other way, as showing a white and black narrative was never the goal, only a blurry grey with a light of optimism shining through. While the unions and disagreements seem to pile higher throughout the film, there is still the underlying source of comradery between the different nationalities that keeps the factory intact.

Have you seen ‘American Factory?’ Let us know in the comments below!