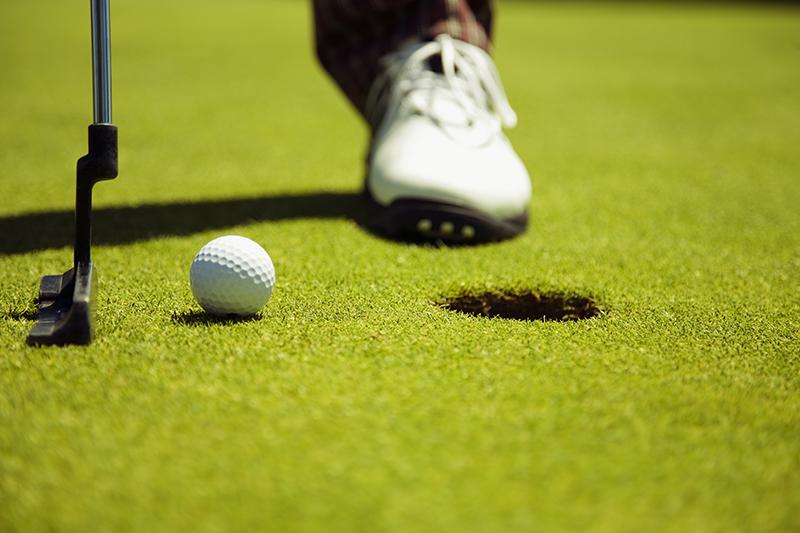 Caucasian adult male playing golf in country club. The man is preparing to hit the ball.

Coming off a previous season with a record-breaking score of 582 at the Class 4 boys’ golf state championship, the Bruins will compete against Hickman High School (HHS) today, marking their first week of matches for the season.
The team experienced difficulties with practicing due to the recent intense and volatile weather patterns but made use of the circumstances by improving their mental toughness and strategy for the season ahead.
Sophomore Sean Minor said the team’s main focus for the year is growth with his personal goal for today’s match to post a good number, but more importantly, to get a team win.
“I definitely think getting the team in competition is great,” Minor said. “I’d love to see our guys go out and play well and win the match.”
The team has a lot of new recruits this year, many of whom have prior experience in the sport. Freshman Chase Knorr said he hopes he and the team make it to state and that today’s match helps work toward that objective.
“I see this match as a place to get my feet wet since I’m only a freshman,” Knorr said. “I’ll be able to practice over spring break and bounce back on April 1 at [the] Columbia Classic.”
The team started off its season this week with matches Tuesday against Battle High School and Wednesday against Helias Catholic High School. Results of these were not known at press time. With such an extreme competitive starting week, Head Coach Austin Reed is hopeful to claim the early season match today as a win for his team; however, Reed said he is more excited to get his younger players more match experience.
“We got a lot of good golfers,” Reed said. “We got a lot of guys who play consistent golf which translates into good golf.”
Minor agreed with Reed, saying the biggest strength the team has is its raw talent and great leadership from upperclassmen.
“For the season, I want to be as consistent as possible and do my best as leader of the team,” Minor said. “I’d love to take medalist honors at state this year and for the team to retain our title.”
For the season ahead, Reed hopes to have success and push the Bruins to another state title, and said he doesn’t see any rival teams currently threatening the trajectory to champion status.
“I want the guys to enjoy each other, to get along and to enjoy golf,” Reed said. “I wanna have some postseason success, so I think we need to get to state, and it will just be a matter of how hard the guys wanna work if they wanna go beyond that.”