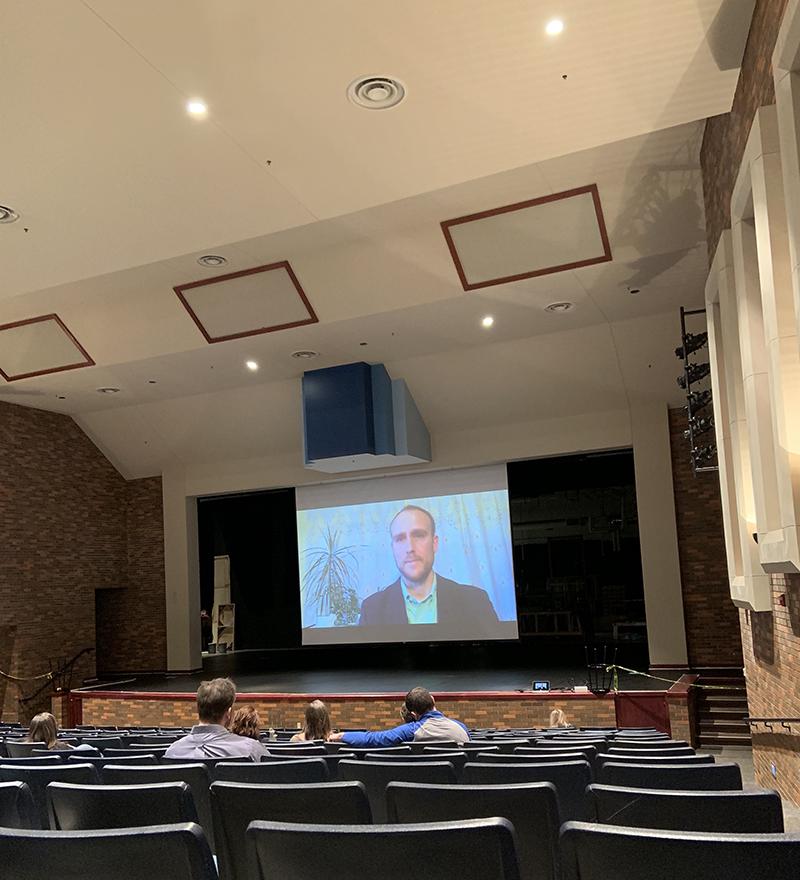 After Dr. Rukstad told staff Sirna was the new principal, she showed a pre-filmed clip of Sirna introducing himself. Photo by Ji-Sung Lee.

Jacob Sirna will be the new RBHS principal, Dr. Jennifer Rukstad announced Monday, March 11, at 8:00 a.m. His administrative role will start at the beginning of the 2019-20 school year.

Currently the principal at Marshall High School (MHS), Sirna was in Columbia Public Schools (CPS) prior to that for eight years, Dr. Rukstad said. Sirna came to CPS from Oak Park, as an assistant principal.

After Dr. Rukstad told staff Sirna was the new principal, she showed a pre-filmed clip of Sirna introducing himself.

“So he is going to tell you a little bit more so you can get a face with the name,” Dr. Rukstad said. “If you don’t recognize the name, you may recognize the face because he has been in Columbia for awhile.”

In the video, Sirna acknowledged today would be bittersweet. The Marshall community welcomed him with “open arms,” he said. Additionally, Sirna mentioned his wife and son were behind him every step of the way.

“I’ve been captivated with the traditions and the culture of Rock Bridge since I moved to Columbia in 2010,” Sirna said in the video.

To plan the reveal, Dr. Rukstad explained there was a lot of correspondence because the news deals with two separate school districts. For example, MHS starts school at 7:55 a.m., while RBHS begins at 8:50 a.m.

“So think it through. We’re coordinating with two school districts. We’re coordinating with the media, and we wanted to make sure that you know first, but there is another staff that needs to know first, too, so with social media the way it is, and it is a small world, after all,” Dr. Rukstad said. “If we tell one school on Friday, and another school, if wait until Monday, we can’t do that. Also we have a late[r] start. The real wish is that we would have come in at 7:30, and I talked us into 8:00, but that’s why, there’s a lot of coordination that must happen, so I can’t say much.”

In addition, Dr. Rukstad said there were other candidates to consider, and it was a matter of getting “all the pieces together.”

“It makes for these kind of secret spy kind of things, but it is really not,” Dr. Rukstad said. “It’s just trying to protect people’s dignity, protect people’s confidentiality and really make sure that you guys don’t ever hear it from someone else.”

Sirna said the forward thinking, visionary RBHS norms, such as real collaboration, shared decision making and freedom with responsibility are cultural practices he has been working to implement in MHS.

“The opportunity to serve in the role as your principal where these practices are already embedded is truly a dream come true,” Sirna said.

Dr. Rukstad and Sirna will meet soon to get started, Sirna said. He asked RBHS staff to look for communication from himself and Dr. Rukstad for opportunities to meet.

“I’ll be working this spring to learn as much as I possible can about the current reality of Rock Bridge High School,” Sirna said. “I don’t want us to miss a beat when it comes to the work of moving further down the road on our current initiatives.”

I’m excited to see what he’s going to be like next year. My hopes are high!