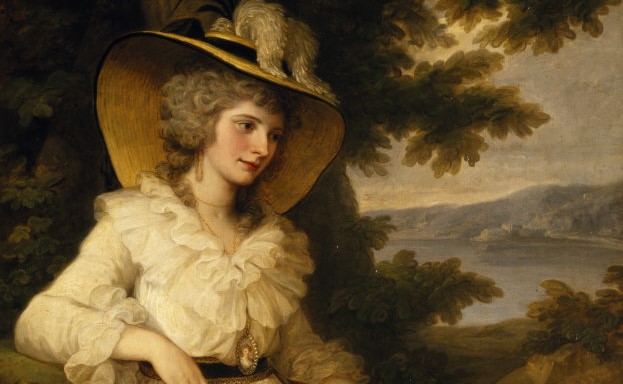 This week’s edition of Royal Tea will be discussing the life of the great-great-great-grandaunt of the beloved Princess Diana of Wales, Georgiana Cavendish. Georgiana’s life, despite being littered with tremendous wealth and indulgence, wasn’t an easy one. Despite being an affluent socialite and early-= fashion icon, her problems largely stemmed from what many 18th century woman could relate to — her husband. From defying women’s social standards to engaging in a less-than-pleasant menage a trois with a woman she thought she could trust, Georgina of Cavendish was one of the most fascinating women of her time.

Born to parents who married for love, Georgina of Spencer had a jovial childhood. She was born on June 7, 1757 to John and Georgiana (Sr.) Spencer in their family home, the Althorp, which was filled with countless art collections and valuable trinkets. The family fortune of the Spencer household only increased after Georgiana’s birth, when the 1773 Enclosure Act gave the wealthy the authority over the common people’s farming land. At the pinnacle of the Spencer wealth, it was decided that Georgina had to be married off to an equally wealthy suitor. Though her parents themselves had indulged in a mutual love, the concept of marriage as a social status strategy was reinforced when Georgina was married off to William Cavendish, the 5th Duke of Devonshire. The romantic Georgiana, who was only 17 at the time, was immediately disappointed by her marriage: her husband was emotionally distant, uninteresting and unfaithful. So unfaithful (and quite ballsy) was William, that upon the notice that his illegitimate child had been orphaned, he tasked Georgiana with taking care of her. Georgiana, although displeased at the fact that William’s affairs had not been mentioned at her wedding, was affectionate towards the young Charlotte, who was later granted the Spencer last name.

Although the addition of an illegitimate child had already provided complications for the Devonshire Estate, no occurrence was more disastrous than the friendship that blossomed between Lady Elizabeth Foster and the Duchess of Devonshire. Georgiana met Lady Foster on one of her frequent excursions to the town of Bath, which she frequently visited for its social entertainment. After hearing about (and reacting to) the terrible stories Lady Elizabeth had to tell about her inconsolable husband and her unfortunate family life, Georgiana’s soft and sympathetic character left her compelled to help out a friend in need. With the approval of William, Georgiana set up living arrangements in her own estate so that Lady Elizabeth, affectionately called “Bess,” would have a temporary living space to share with her sons. Although Lady Elizabeth and Georgiana shared a truly genuine friendship, Georgiana would later discover that she was certainly biting off more than she could chew — but in a world dominated by men, swallowing was all she would be able to do.

Not long after Lady Elizabeth settled down in the Devonshire estate, her and William developed a not-so-secret tryst. When Lady Elizabeth became pregnant with yet another illegitimate child and her affair could no longer be kept as a secret, Georgiana felt anger not towards the best friend that had betrayed her, but to her husband, who had taken the last thing that was uniquely hers. The friendship between Georgiana and Lady Elizabeth became rather complex when it was decided by William that the three would live in an uncomfortable triad. Wiliam, Georgiana and the leech on William’s leg (Good ol’ Bess) would often eat dinner together and live amongst each other, raising their elementary school’s worth of children together. The menage a trois that occured between the three became a hot topic amongst the wealthy: although it was nothing but commonplace for a husband to engage in countless adulterous relationship, it was extremely rare for a husband to choose to keep his mistress and his wife in the same household.

The establishment of such a strange home life was only one of the many interesting events that marked Georgiana’s life. After giving birth to a male heir in 1790, Georgiana was granted considerable freedoms by William, who followed the custom of the time period and allowed her to engage in an affair of her own. Georgiana quickly took hold of her freedom, becoming a political advocate for the Whig party and took frequent outings to the City of Bath, where she and her lover, Charles Gray, spent most of their time. Georgiana’s advocacy for the political presence of women in the Whig party and the scandalous gossip that surrounded her made her a controversial figure, confining her to a more private in her later later years. However, from scandal to scandal, Georgiana’s resiliency and outspoken attitude solidified her status as an icon.

Valeria Velasquez is an artist for Southside Media. She is a proud Nicaraguan, a member of the Emerald Regiment Marching Band, a dedicated AP student and a Chipotle Mexican Grill connoisseur. In her senior year on staff, she hopes to continue to refine her art and writing skills.

An ocean away: Singapore

This is a different type of news story than you guys usually do, and it was really cool to read; I loved it!

Wow! This was really fun and interesting to read. I can’t wait to read the next edition!