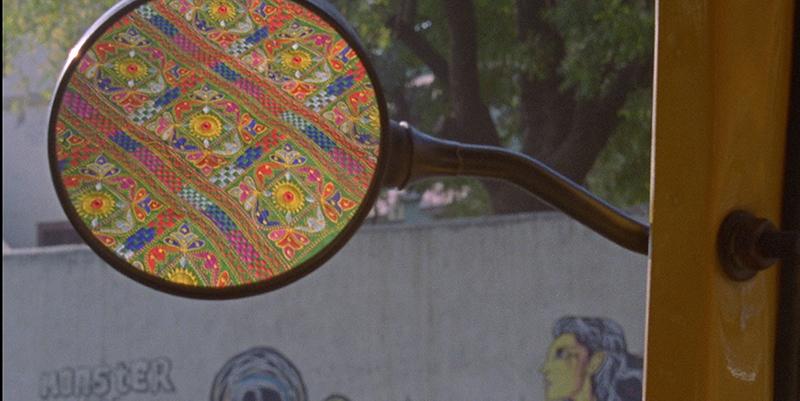 Jodie Mack’s The Grand Bizarre is not a documentary; it’s an art project. There is no clear purpose to the film, nor is it informative in any way. The meaning behind Mack’s visuals is highly interpretable, as most art is, but calling that a documentary is like calling abstract paintings textbooks. This one-hour feature of Mack’s artistic mind belongs in a whole other genre.

By rearranging a collection of textiles in many different ways, Mack creates a stop-motion film and accompanies it with a collection of diegetic sounds she recorded along the way remixed into different musical beats, like the noise of a machine weaving cloth. Over time, more sounds would join in and decent tunes would be formed. Unfortunately, well over half of it is just repetitive junk that reminds me of watching a movie skipping around due to the disc in the DVD player being scratched.

The art is impressive, but way too overwhelming. Just before the movie began, the audience was given a warning that the movie might not be for those sensitive to flashing lights and images. This warning shouldn’t be taken lightly, as I’ve discovered firsthand that it refers to the entire movie. It felt like every second I would see three different close-ups of bright and colorful fabrics. Sitting in a dark theater certainly didn’t help; I had to close my eyes a few times just to give them a break, but every time I did I felt like I missed a big segment.

In the interview afterward, Mack stated that she wanted the film to be a sort of shared learning experience between her and the audience rather than being binded to the expected standard of cinema to teach. For the best experience, prevent yourself from trying to find a message to take away from the movie, as I found that I enjoyed it more later on when I stopped trying to find meaning and rather just appreciate Mack’s artistic talent. For comparison, the most similar motive behind a piece of art that I could think of was the “it’s a small world” ride at Walt Disney World. Both this ride and The Grand Bizarre utilize music and decorative pieces to explore different cultures around the world.

This film is impressive to look at for however long your eyes can manage it. If anyone is ever able to watch it in their free time, I recommend doing so in a well-lit room on a screen that doesn’t take up the entire wall.

What are your thoughts on ‘The Grand Bizarre?’ Let us know in the comments below!