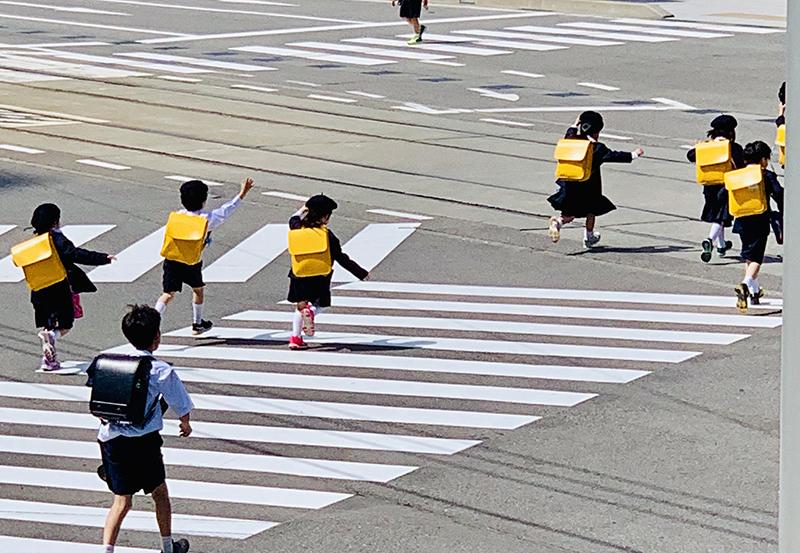 Kindergarten students run across the street in Toyama, Japan, in order to catch the train home from school. George Frey / Bearing News

Here in Japan, children are able to fulfill more real-world responsibilities on their own, and in fact, they are expected to do so. This isn’t because their parents don’t care about their well being, but simply because it is a critical skill in the adult world, which they need to practice.

I arrived at Ueno Station in Tokyo on a Sunday afternoon, so the streets of the city were filled with mostly older business people and college students from the nearby University of Tokyo. It wasn’t until around seven in the morning on Monday when I saw just how independent Japanese children were compared to their American counterparts.

As I walked down Asakusa Dori Avenue, the large main street in Taito ward, I noticed children that looked no older than ten years of age in their school uniforms, with small multi-colored backpacks and bucket hats. As I walked towards the Inaricho subway station, I saw a small, crowd of children walking by themselves to catch trains to school. They looked almost like a school of fish as they rushed down the subway stairs with their little yellow hats bouncing up and down off of their heads. The older high school aged kids were also wearing uniforms but were mostly biking or walking to the nearby high school, soaking up the air of the streets and passing pedestrians.

Back in Columbia, or most places in the United States for that matter, elementary school students wouldn’t be seen without their parents walking at least 100 feet away. During my time in elementary school, I was allowed more independence than many of my peers, but I was still looked after closely. I was never allowed to take the little amount of public transportation the United States has on my own, or for that matter, go far enough to the point where I would get lost.

When I was seven, I was allowed to walk to and from school alone, but it was less than a mile from my home. For Japanese children, however, school could be on the other side of their hometown and they still would be able to navigate their way home.

The self-reliance that Japanese children have is not just expected in getting to and from school, but also at home with daily tasks such as doing laundry, maintaining one’s hair and even running errands.

In smaller cities in Japan, like Toyama, it is no different. When I arrived in the city at around six in the evening, middle school and high school aged children were coming home, presumably from their extracurricular activities. While these kids were likely more equipped if they got lost or attacked, this is certainly different than what we would see in Columbia. At schools like Gentry Middle School and RBHS, parents line up for nearly an hour to pick up their children and take them home. While some children walk, it is not as common, and with RBHS students, it is much more typical to drive oneself home.

In Columbia, House Bill 606 was proposed to allow high school students around the city to use city buses sanctioned by Columbia Public Schools to get to and from school; it is safe to say the bill has been met with some mixed reactions. For some parents and students, it is a ludicrous idea to have their children ride a city bus, while for others it’s less of a concern. In Japan, however, the majority of parents would likely not even have a second thought about allowing this bill to pass.

One factor to acknowledge when comparing self-reliance among children is that the crime rate per capita in the United States is much higher than the crime rate per capita in Japan. This means that American parents have certain convictions when it comes to allowing their kids to participate in certain tasks, simply because it is just not totally safe, especially for youth living in large cities or lower income areas.

What we should be asking ourselves isn’t specifically why are Japanese children tasked with getting themselves to and from school, but rather, why does American culture not emphasize independence on a larger level at home until children are in their early teens, and what does this mean for our future American society? While the United States and Japan obviously have different ideas about the independence of their youth, American parents should teach their children self-reliance at home, to prepare for the real world ahead.

Other posts in the series

Girls’ soccer gears up for tournament