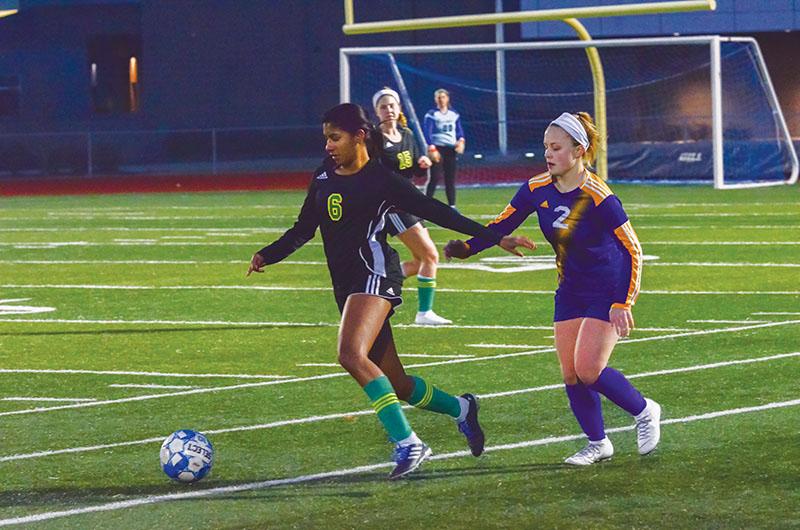 BREAK AWAY: Senior defender Lily Abraham takes off during the jamboree game against Hickman High School (HHS) Friday, March 8. The Bruins ended the scrimmage with a (1-1) draw. The jamboree was the first time the team played under new head coach Scott Wittenborn. Photo by Camryn Devore

With two games already under the belt of the girls’ soccer team’s season, the Bruins will play against Nixa High School on home turf, tomorrow.
With the season just beginning, the team has been working on its cohesiveness, making sure the Bruins are able to effectively work as a whole.
“Right now we are just trying to find our chemistry and become a team. We’ve been learning a lot of new ways to attack and defending methods, but it hasn’t really been specifically catered to playing one team,” junior Louisa Frey said. “Team chemistry is very important. Without it, passes wouldn’t be completed, and runs couldn’t be made. No one would be talking on the field.”
Frey believes teams would be a mess without a good bond, and RBHS’ is developing positively. With a new season and players after the loss of seven seniors, she said team chemistry has solidified after a player knows another’s next move in a game.
While every year there are new teammates, the team is adjusting to the addition of a different head coach, too. Scott Wittenborn, head coach for boys’ soccer, replaced the old girls’ soccer head coach Gary Drewing; this will be Wittenborn’s first year coaching the girls’ program.
“Our goals are to grow together as a team, work hard each day and have fun. We have a very talented group of girls, and I’m hoping that we can play hard and compete in each game,” Wittenborn said. “We have some dynamic playmakers, as well as speed spread out all around the field. Once we can get our shape and game plan sorted out, we hope to be able to move the ball quickly and attack teams at a high pace.”
Junior Sydney Klimek is confident in the abilities of the new coach and sees players staying focused and creating a connection with Wittenborn, which she believes strengthens the team.
The Bruins, Klimek said, have been team building with activities, such as volunteering at the food bank, but have mainly been trying to make the most out of the practices they have.
“Last year we had an extremely talented senior class, so losing them has had a really big impact on our team,” Klimek said. “We’ve been working hard to fill those holes and so far we’ve been doing a great job picking up where we left off last year.”
With the loss of senior players, Klimek said the team has created goals to strive for throughout the season.
Put in numbers, the Bruins have an aspiration to score two goals or more per game, win 12 or more games and win a game after a loss.
“[The team’s goal is to have] five seconds of crazy determination to get the ball back if you lose it, never let the field be silent and always give your best,” Klimek said. “We decided to make some measurable goals and some non-measurable goals this year.”
With the team’s goals listed out, the players are working together toward the same ambitions. As the team’s practice time continues, the bond grows stronger.
The determination and hard work the Bruins are willing to put in the season will be the trait that helps brings the girls’ team a successful season.
Frey believes this essential trait of a cohesive team will allow it to have a great season. She is excited to see what the newly formed team will bring to the table.
“We have a drive to win and effort to put in the work to get better,” Frey said. “Our overall connectedness for sure can still grow and also overall intensity.”