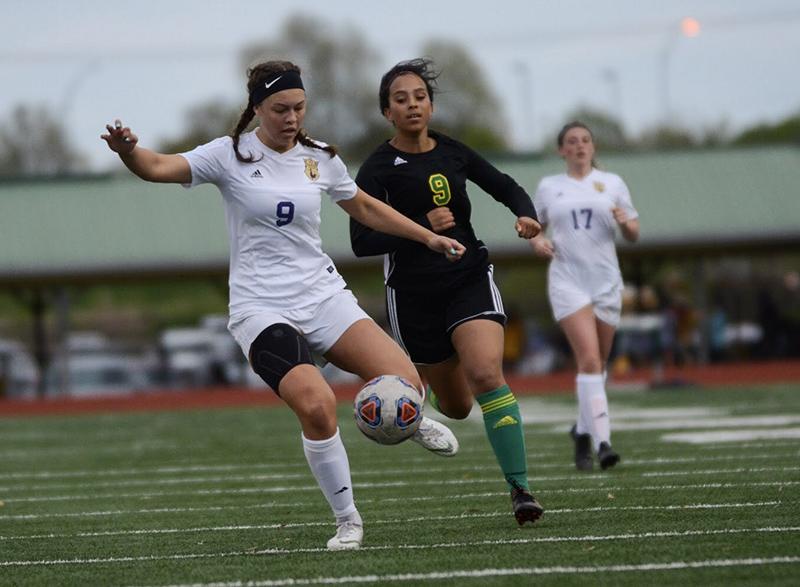 Sophomore forward Sta Omar runs after a PHHS Chick in an effort to win the ball. Omar, a two-year varsity member, said she can feel the changing dynamics on her team. "I think our team has a ways to go to become the team we want to be," Omar said. But I am confident, as we have shown a drive that will make us dangerous in the future."

The Bruins put the effort into every minute of play, but the team’s leaders said the Chicks’ competitive capacity caught them off guard.

“Our biggest weakness was how unprepared we were to play such a skilled team,” senior captain and defender Alexis Kliethermes said. “Two players on Pleasant Hill were particularly skilled and we just weren’t positionally prepared for the speed and skill.”

Additionally, after junior goalie Morgan Boussad hyperextended her elbow in the first half, the team’s challenges heightened without their primary keeper. Sophomore midfielder Hannah Juengermann replaced Boussad’s position in the second half despite not playing the position since fifth grade.

“I was actually really excited to play in goal,” Juengermann said. “I told [Coach Wittenborn] at the beginning of the season that I would love to help out whenever necessary, so when I was asked, I was happy to help.”

Although the Chicks came out victorious, the Bruins are hopeful in their ability to bounce back as a team and to prepare for more competition next week in the St. Dominic Tournament in St. Louis.

Kliethermes said the team will focus on positioning and studying the competition team’s dynamics in the coming practices to improve for the tournament.

“We’ve got to put this loss behind us and mentally prepare ourselves for another week full of soccer,” Kliethermes said.

Have you ever been to a Rock Bridge girls soccer game?