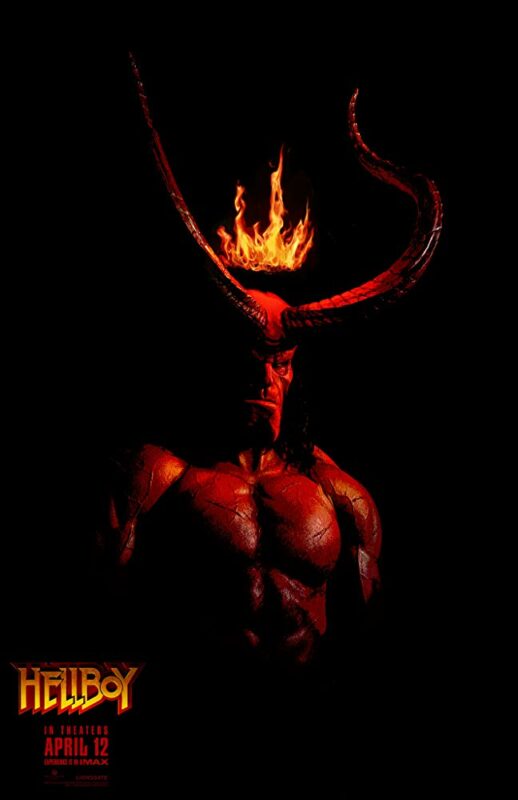 Neil Marshall’s remake of Hellboy mixes his spin on the DC Universe character with the strange mythos of King Arthur that leaves the audience in a head scratching state of confusion. With a subtle origin story that nods itself to the 2004 version while also juggling the new adapted plot makes for an over complex, two-hour long feature film that fails to delineate itself from the earlier 2004 version.

The first iteration of the comic hero was in 2004 directed by Guillermo del Toro with Ron Perlman as the lead role of Hellboy. Hellboy (2004) was one of the first superhero movies, even beating Ironman (2008) to the punch to be shot in live action. The film enjoyed above average reviews with a 6.9/10 rating from IMDb and moderate box office success grossing close to $100 million in worldwide sales which is a solid turnover for a movie with a budget of about $66 million. The 2019 version, however, has not been so fortunate. On its opening weekend, Hellboy (2019), with a film budget of $50 million, received only a little $12 million in ticket sales.

The overt amount of CGI is not kind to the eyes of the viewer nor is the makeup work on lead actor David Harbour, who plays the dark protagonist himself. Hellboy is supposed to be a darker, grittier, and borderline sinister take on the traditional clean cut good guy that saves the day. With that in mind, it makes sense that the character would have not have the diamond cut jawline of Superman, nor the balanced frame that Wonder Woman possesses. Hellboy, to some degree, is expected to look a little more unconventional in the superhero, but that doesn’t mean you have to make him look disfigured. The harsh solemn eyes buried in the back of his skull covered in dark eyeshadow and a blood orange contact lens is overkill making intimate and important dialogue scenes intended to add depth to the main character is slowly corrupted into a bad spoof scene done by College Humor.

The remaining cast of supporting characters and antagonists is left uninteresting despite the vast amount of development they receive, primarily Professor Broom (Ian Mcshane), Major Ben Daimio (Daniel Dae Kim), and Alice Monaghan (Sasha Lane). All three of these make up Hellboy’s supporting cast and at times are entertaining to watch but eight times out of ten they stick out as an eye sore as to how ungodly long this film feels. Hellboy (2019) is a two hour flick but with the audacious amount of origin stories, universe building, overarching storylines, and plot twists is enough to make anyone root for Earth’s doomsday.

The soundtrack is a mystery in it of itself. A weird mixture of Indie rock, alternative rock, and a Spanish Cover of “Rock You Like A Hurricane” make up the album for the movie. The background music is initially undetectable when first introduced in a scene but after 10 seconds one begins to realize that they are playing an X Ambassador song in an R -rated movie that features demon hunter fighting a 5th century witch queen over a rift to Hell.

This inappropriate match up repeats itself in an unholy manner driving a wedge between the audience and the plot of the movie preventing any sort of connection and immersion into the story. Hellboy 2019 stands in a dwarfed position compared to the previous installment of the franchise and should noted as an example of how not to market to the fans of the darker DC comic universe.

What are your thoughts on the new Hellboy movie? Let us know in the comments below!