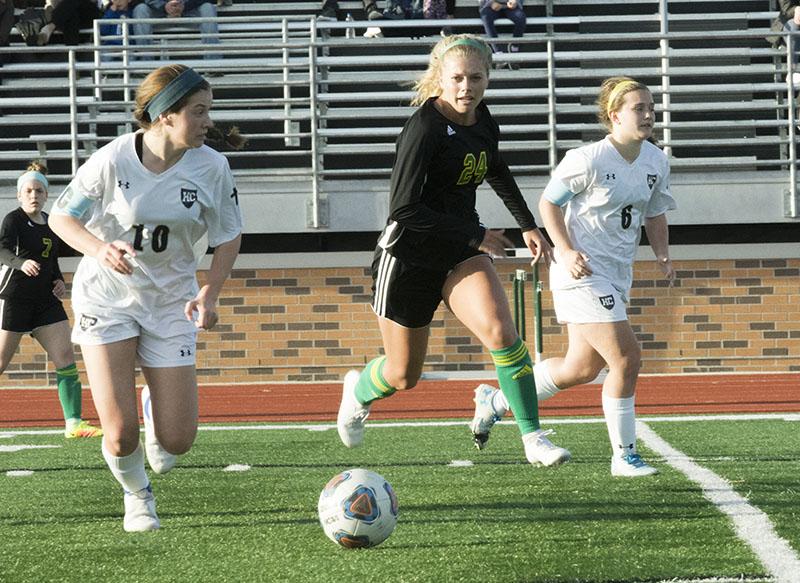 Junior Caroline Cole attempts to direct the ball towards the Helias goal post during the first half of the game. Photo by George Frey / Bearing News

The girls’ soccer team and Helias Catholic High School went head to head yesterday evening when the two soccer teams faced off for the sixth game of the Bruins’ season. The Bruins fell defeated (2-3). With several weeks remaining until the May 11 district tournament, the team is looking to perfect its playing strategies on and off the field.

Sophomore forward and mid-attacker Hannah Juengermann believes the communication ability could have been better in the first half, but is proud of her teammates for coming together and creating a plan of action during the second half.

“We definitely could have pushed more and attacked more. I think we sort of let them attack us instead of the other way around,” Juengermann said. “The second half, on the other hand was really good. We got those two goals, which is impressive since we were down three. I think the whole team during the second half worked so well, talking was great and sending balls over the top of the defenders was really great.”

When it comes to strategizing, communication is imperative for success. Head coach Scott Wittenborn spoke about his focus for the game before his athletes took the field. Throughout the game, he directed players on and off the field. For Wittenborn, the key to winning a game is not just communication, but also maintaining one’s position and competing to her full potential, despite obstacles.

“We were not doing the things that we try to do. We weren’t pressing as a team defensively and we weren’t challenging all of the fifty-fifty balls,” Wittenborn said. “Halftime really challenged them to reevaluate and how we can play, always finding a mark defensively, trying to get the ball wide. I think we did a good job of that in the second half. We turned the pressure up and that is what allowed us to score the two goals and nearly tie.”

For Wittenborn and the players, trying one’s best can mean a variety of things. For senior defender Kate Leuenberger, there were factors that could have been improved upon, but coming back from spring break presented challenges in the team’s ability to maintain its energy.

“Personally, I think we all just struggled coming back from spring break cause we were all kind of gone and we struggled getting back into the rhythm, so we didn’t do as well as we should’ve done in the first half,” Leuenberger said, “Then we kind of picked up the second half but it wasn’t enough. I think we had a good effort in the second half, but we could’ve done better.”

In the end, Juengermann and her teammates pressed hard during the second half, and for her, that’s what made the team improve, along with Wittenborn’s coaching.

“We definitely work very hard to get goals and we definitely just brought it to Helias,” Juengermann said. “Witt always tells us to be a high pressed team and just press the ball, and after losing it, get it back right away. We have a thing called ‘three seconds of crazy,’ which is when we lose the ball, we try to get it back as quickly as we can in three seconds. That helped us a lot and we tried really hard, so those two goals were definitely deserved and we should’ve gotten more.”