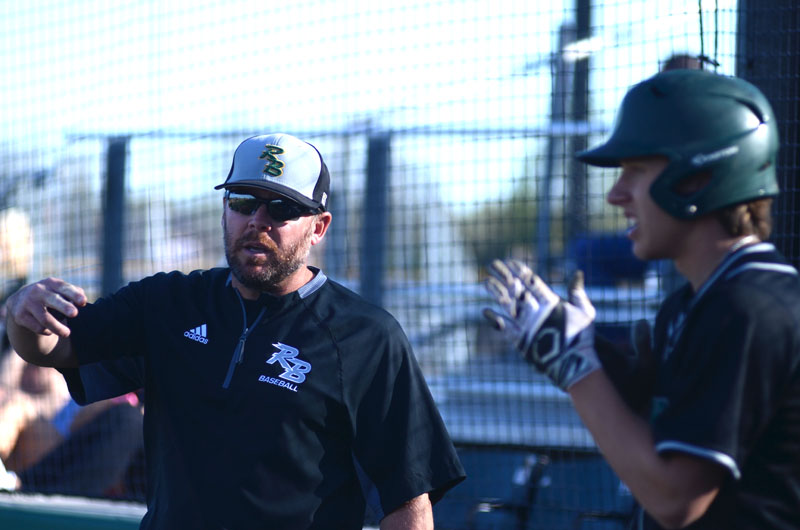 Head coach Justin Towe talks to junior Spencer Nivens about his batting approach. Nivens was next to bat and received a few words of advice before stepping in the box.

Though the boys’ baseball team faced St. Dominic High School (SDHS) at 5 p.m. Monday, the Bruins did so without benefit of specific prep time. The weekend prior to the Monday night game, the team participated in the Columbia Tournament, which it played in from Thursday to Saturday. Because of the strain of the tournament, head coach Justin Towe decided to give the team Sunday off. However, this meant that the boys had not specifically prepared for their game against SDHS.

“We came off a really long tournament this past weekend with five games in three days. So, we did nothing baseball-wise yesterday. We took the day off and we tried to refresh and recharge the batteries,” Towe said. “We came into this game today just going to play our game. I told the guys, what might be our biggest enemy today may be that voice in the back of your head saying your tired.”

Despite the fatigue, senior Zach Hay, who pitched for the Bruins Monday night, was able to prevent the Crusaders from scoring until the fourth inning. The first two innings proved fairly uneventful for both teams as neither were able to score. The Bruins capitalized on a couple of fielding errors on SDHS’ part giving them base runners throughout the two innings but they were not able to hit them in.

In the bottom of the third, the Bruins would turn on their offense and put up two on the Crusaders. Junior Will Norris hit a double with runners on and was able to give the Bruins the lead. Yet, despite the change in momentum SDHS came back to score two as the game entered the top of the fourth, tying the game at [2-2] and putting RBHS back to square one.

The Bruins once again rallied their offense and put another three runs up, making the score [5-2]. SDHS once again proved to be resilient as the game now entered into the fifth inning. They put up another three runs, tying the game once again. Later in the game, Towe made a pitching change, putting in senior Kent Barnes to finish the inning.

The game remained close as it came to the last inning. The Bruins made yet another pitching change as sophomore Bennet Brownfield stepped up to the mound. Brownfield was able to to make three straight outs and pull the momentum in the Bruins’ favor. To win the game, RBHS would have to score two runs. If the team scored only one, the game would head into extra innings. The Bruins, however, took the challenge in stride and started their rally. The first batter hit a single, getting him on base. The next two batters were able to hit him in, leaving the score now [6-6] with the Bruins still at bat.
Junior Parker Wright made his way up to bat with no one on base. Wright hit a stand up double with only one out on the board. The next batter stood in the box, the first pitch was wild, the ball escaped the catcher. Wright was able to steal third, as he rounded the base to look towards the catcher he realized that the catcher didn’t know where the ball was.

“I saw the catcher react to the ball and I just took off,” said Wright. “In practice we have a 30 minute session of base running every day. We usually do lead offs and stuff like that because it helps you react to the ball.”

Wright then stole home in a final attempt to win the game for the Bruins and the umpire declared him safe as he slid into the plate. The Bruins defeated the Crusaders [7-6] in final effort in the bottom of the seventh inning. Yet, there was not much time for celebrations as RBHS plays at 5 p.m. on Thursday, at home again against the Helias Crusaders.

Juniors Spencer Nivens and Brett Mooney share a moment of celebration. Nivens had just scored and Mooney was next to bat. The two rejoiced as the Bruins regained the lead.
Relief pitcher, senior Kent Barnes, stepped in for teammate Zach Hay at the top of the fourth. Barnes pitched two innings, giving the Crusaders a total of four runs.
Senior catcher Noah Patrick receives a throw from junior outfielder Will Norris. Patrick bends to block the incoming through in attempt the tag out the SDHS runner.
Junior Will Norris takes a lead off from third base. To arrive on third base Norris had hit a double, then advanced to third on a pass ball.
Head coach Justin Towe talks to junior Spencer Nivens about his batting approach. Nivens was next to bat and received a few words of advice before stepping in the box.
Senior Zach Hay steps on the mound as the starting pitcher. Hay pitched until the fourth inning and held the Crusaders only two runs.
previous post