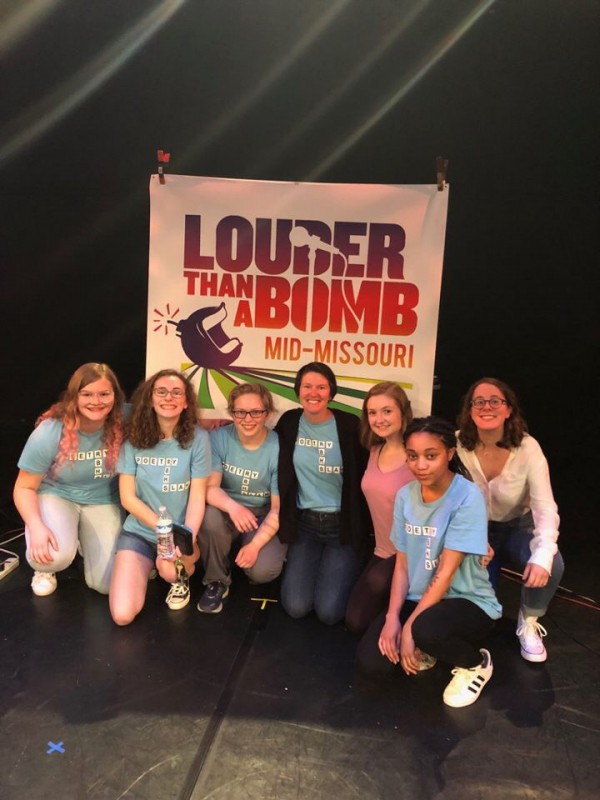 Students and coach Daryl Moss pose at the Warehouse Theater after winning second runner-up a Mid-Missouri Louder Than a Bomb finals.

Saturday, April 20, four RBHS students performed at the Mid-Missouri Louder Than a Bomb slam poetry competition finals after advancing from semi-finals the prior Saturday. They placed second runner-up in the competition against Hickman High School and Jefferson City High School with four individual poems and one group poem.

Reading specialist Daryl Moss has coached the slam poetry club since its initiation in April 2017. This year was the second annual Mid-Missouri Louder Than a Bomb finals competition and RBHS’s slam poetry club’s second time participating. Their competition season started in early March with two bouts or non-competitive shows. They spent the months leading up to March writing to prompts and practicing performance during their weekly meetings.

“I think our biggest obstacle is overcoming self-doubt and lack of confidence,” Moss said, “and so when we’re together I think we try to just build up the confidence and help them know that what they have to say matters and that it’s good.”

Overcoming nervousness is an ongoing challenge for junior Maddie Renner, who has been in the slam poetry club since its founding. Her poem, called “On an Adventure to Find Where I Belong,” was about a beloved summer camp closing and her realization that what she missed was the people and experiences at the camp. While her performance did not go as planned, she was by no means devastated.

“I was terrified. I had just barely had that piece that I performed memorized, and last week I had done the exact same thing,” Renner said. “I had frozen up and forgotten what my next line was, and so I was afraid of that happening again, and then it did, and it’s really fine. I’m just proud of myself for getting out there.”

Junior Logan Banker joined the slam poetry club at the beginning of her sophomore year. She uses poetry as an outlet to express her emotions about difficult life experiences. At finals, she chose to recite the third slam poem she had ever written, about her experience with conversion therapy.

“I had an incident in my life, and I didn’t know how to handle it, and it wasn’t going well. Maddie showed me that I could do poetry. So, I kind of used that as my voice for a lot of things,” Banker said. “I draw on a lot of personal experiences. I wrote [the poem] for my own sake, [because] sometimes you just need to get it out of your head and somewhere. I just want to let other people know that they shouldn’t feel so isolated.”

For the Louder Than A Bomb finals, every team must perform a group poem. While other schools chose to repeat the poem they had done at semi-finals, the RBHS team decided to go with a poem they had written in the week between semifinals and finals. They wrote a piece about the shooting threat RBHS received Monday, April 15.

“The group poem that we did today was inspired from the threat that we got on Monday,” Banker said. “I originally wrote it as an individual, but I thought that it would be really impactful because it was a shared experience. We put it together in an hour. That was stressful, but it turned out great.”

Although competing was nerve-racking, the group’s close bond helped them pull through. They tried to keep things light by putting their worries into perspective.

“I sat in my car and I jammed out to ABBA with the rest of my team,” Banker said. “We were all in my Subaru and we were having a good time because sometimes you just need to forget all the pressure that you put on it because it doesn’t matter. The point’s not the points, the point is the poetry, and I am growing into that the more that I do this.”

Moss expressed a similar sentiment. To her, the team’s placement mattered less than what they had achieved just by performing. She admired their ability to overcome their anxiety and share their writing with an audience, as well as the speed with which they were able to bring their group piece together.

They would just grab me

Good job Slam Poetry! They did great at the Luder than a Bomb Competition!