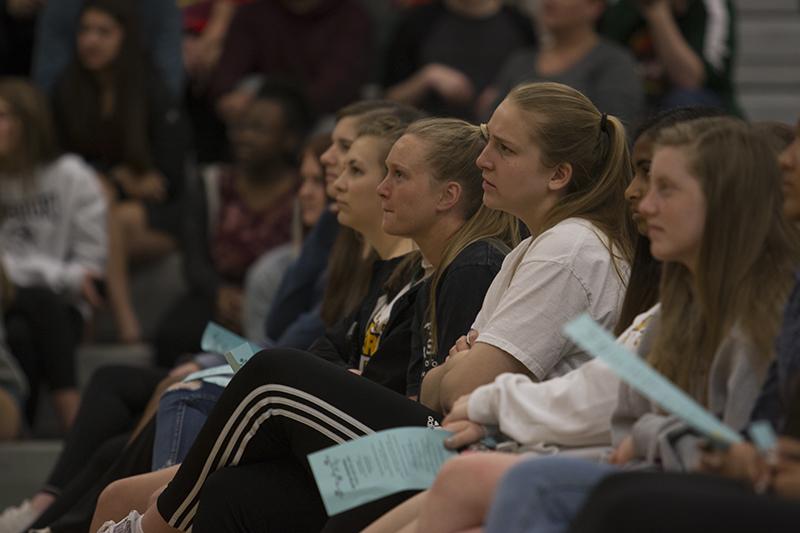 Unlike previous years, StuCo allowed rising juniors to be a part of the running for an officer position. StuCo sponsor Kelley Wittenborn said no current juniors in the group were interested in becoming treasurer, so she thought of opening the spot to sophomores in student government. This was due to the fact that current sophomores would have one year of experience in StuCo, which is a requirement of filling the position, Wittenborn said.

“For this year only, we opened the position of treasurer only to the current Student Council sophomores. This was ultimately my decision, supported by [David] Egan, our Activities Director, and Dr. [Jennifer] Rukstad,” Wittenborn said. “At this point, this was a mostly unprecedented event. In my five years of sponsor, I’ve never seen any of the positions not have at least one person interested in filling that role.”

Current officers did not weigh in on the decision, as the final outcome “won’t affect them,” Wittenborn said.

Officers, Wittenborn said, play very large roles in StuCo, as they are in charge of major planning and orchestrating of the year, including events, philanthropy and fundraising. They also meet weekly with Wittenborn to discuss upcoming events and are role models for other StuCo members, the senior class and the school.

When coming up with the final plan of who should be able to run for StuCo treasurer, Wittenborn had to consider who would have the best fit the role, would benefit the student body and come in with a solid background already in student government.

“I debated if it were more important that the role goes to a senior or a person who has one year of Student Council experience,” Wittenborn said. “Ultimately I made the call that I would offer the position to next year’s juniors who were on Student Council this last year as sophomores.”

Wittenborn told the current sophomores in a meeting Wednesday, April 3 that they could run for the position. Sophomores Garrett Roach, Peyton Brooks and Claire Swindle took the opportunity. All said they jumped at the chance to become a leader in StuCo.

“I think that [sophomores] that thought about running because like it’s cool to be a junior and an officer,” Brooks said. “I’m not sure that they cared for what the position was.”

For the dynamic of StuCo and having a junior as one of the four leading officers, Roach sees the change in authority as strange but nothing that will change the current climate or structure.

“I was thinking about that. It’ll be odd to have a junior that technically has more authority than the seniors, but then again [the rising seniors] had the opportunity to run and chose not to take on the responsibility,” Roach said. “I think mostly it’ll be a friendly, open environment as always.”

All three candidates showcased their platforms at the spring assembly with speeches. Each sophomore described their own reasons for running and why they would best fit the role of treasurer.

Current freshmen, sophomores and juniors can vote for StuCo president, vice president and treasurer on the RBHS homepage. Voting ends Tuesday, April 9 at 2 p.m. and StuCo announces the positions at 4 p.m. the same day.

“My hope is that this situation is an anomaly, and doesn’t become the standard. It’s really important for the four main officers to be both senior leaders in the school, and have past Student Council experience, so they can represent the student body to the best of their abilities,” Wittenborn said. “This year, the need presented itself, and three of our rising juniors stepped up to the challenge. I encouraged them not to come into this lightly, as a Student Council officer role is a serious time commitment, and junior year traditionally for students is the most strenuous in high school.”

“I want to be treasurer to help out my school. I believe I’ve put a tremendous amount of time and commitment into student council so I want to continue growing in my leadership skills with Student Council. I understand that as a Student Council representative you have to be committed to taking time out of your day to help out and being willing to come in earlier mornings or to miss classes and in turn make up for them for meetings.”

“Student Council is one of my favorite parts of school. I was the StuCo president back in the Jeff Middle School days and I’ve dreamed of being an officer since the beginning of freshman year. I’ve had a lot of fun in student council thanks to the officers last year and this year. I just want to pass it on, and have more of an opportunity to make it fun for the lower classes. I’ve learned, through looking up to and befriending the officers, the time commitment and skills needed to do a good job. I’ve been trying to emulate everything they do, because I’ve wanted to be an officer since I joined the council in 2017.”

The modern gent: an April lookbook

All of these speeches are amazing! All of the candidates are awesome!

I liked all of their speeches and I wish the best of luck to these candidates!