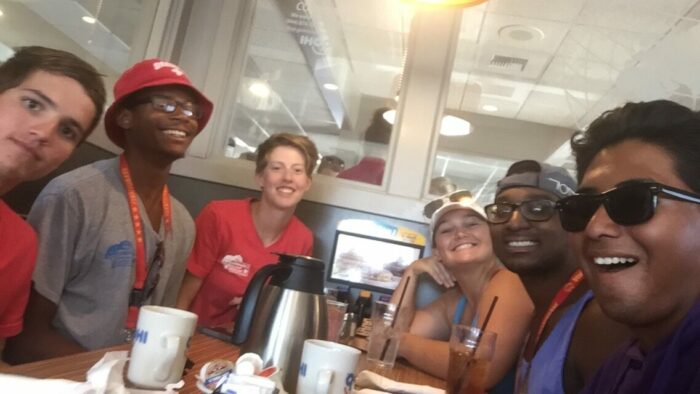 Summer brings on memories of swimming pools, fireworks and grilling. When I was choosing songs for this playlist, I tried to think about my summers. I particularly remember driving with friends and listening to chilled out songs by Blackbear and other artists. I also remember blaring bass-heavy hip-hop songs. While some of the songs I chose are newer releases, others are songs from Douglass Family Aquatic Center over the summer of 2018. I tried to find a happy medium with equal amounts of different summer vibes, from the heavy bass of “West Coast” to the chilled out island vibes of “Warm.”

Marc E. Bassy has a lot of great songs I enjoy, as does Skizzy Mars. Whenever the two team up, their styles just blend perfectly, and this song does not disappoint. Bassy’s catchy chorus and Keegan’s sample just makes a very lighthearted song to play in the car or at a party.

An overall chilled out track, “Warm” is a song I was introduced to over the summer when I got a ride from a coworker. Everytime I hear the guitar riff in the intro I just kick back. Mia’s voice especially stands out and the duo bring a pleasing vocal performance.

Although the theme of the song is a little gloomy, the upbeat tone makes the song very cheerful. The song is very catchy, with the narrative about a girl who is “Wicked” and refuses any advances from both Mansionz and G-Eazy.

Off P-Lo’s sophomore album, “thrive” is all about being the greatest and ignoring anyone trying to slow you down. Toward the end of the song P-Lo included a clip from a 2015 interview with Kanye West talking about continuing to be the best. The song has a great message and I used to listen to it before work every morning because I would feel lifted and ready.

Anthony Russo’s music in general is very focused on love and heartbreak, this one being about the latter. Russo talks about how things have changed with a girl who wants a serious relationship, mostly how he thought he could “be a self-made bachelor” but now he realizes he might also want a serious relationship. The track is a great story of boy-meets-girl with the added suave of Russo.

Weezer “Island in the Sun”

Any summer playlist is nothing without at least one song by Weezer. I chose this particular track because when I flew to Florida during the summer of 2016, “Island in the Sun” came on the instant we broke through the clouds over Ft. Lauderdale. Everytime I hear the song I immediately think about my trip to Florida and all the good memories.

“I’m So Tired” is another song that just reminds me of good times. After a long week, my friend picked me up and we drove around town listening to music, and when this came on we both sang the lyrics with the windows down. It’s been a tradition to play the song when we hangout.