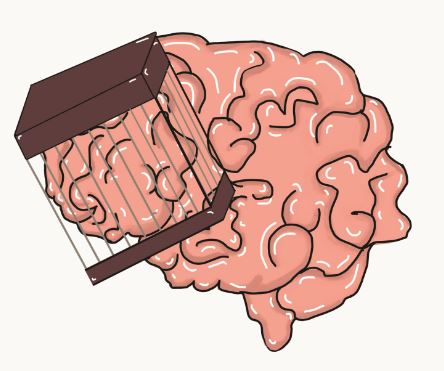 Men are not allowed to cry, are they? It’s an effeminate trait, crying. My father has encouraged me to stay strong and not cry. He was raised under the fact that men don’t cry, and they stay strong above everything. They don’t display any signs of defeat or loss of dignity. He has passed this belief on to me.

As I’ve gotten older, though, I have begun to question this idea: my father might be wrong.

There might be another option rather than hiding my feelings in my head. Should I choose my real emotions, or should I stay strong and keep up with the rules of masculinity? I have this pull to appear more masculine than I truly am. I walk in a different way and talk in a deeper voice.

These actions reassure me; make me believe that maybe I am a strong male; I’m not. Acting more masculine leads to multiple downfalls, though. The biggest one I face is hiding emotions.

When I push away how I feel, I believe I’m benefiting myself. Attempting to forget something seems much easier than facing it head-on until I see piled-up feelings aren’t any better. I tend to forget that it’s not that easy to simply forget something. Feelings have a way of coming back and haunting you. Once they do pile up, I fall apart into complete disarray leading me back to square one.

One thing men don’t prepare for are surprise sensations. The other day, while I was doing my morning routine, my phone started to ring. It was a call from my mother. In this moment I noticed she wasn’t home like she usually is. So I answered and she told me she was heading out of town. My grandfather had died unexpectedly. He had no disease or any other reason for us to expect him to pass. It was completely out of the blue.

My eyes started to glass over. A wave of pain stung through my skin. My teeth gritted together, trying to hold back grief. I tried not to let the tears roll out of my eyes: I was not prepared to cry. By no means was crying a masculine act.

Despite how much I tried not to, I cried.  Tears raced down my cheeks, one after another. My insides felt hollow as though I were nothing, just a deep, black abyss. In my head, I felt wrong. Crying wasn’t the correct reaction for a male. But that statement made me question myself. Why can’t males cry? Why has it always been seen as a woman’s action? How am I supposed to react?

At that moment I didn’t have the answers, and I may never.

While society made males’ crying inappropriate, there’s more than just that. It’s expressing themselves in general. How often have you asked people how they are, and they answer with “I’m okay” or “I’m good?”  This could really be what’s going inside my head, but I can’t count the times I felt something else underneath. I was something other than good.

I’ve been upset. I’ve felt angered. I’ve envied another person. I can’t possibly sum these emotions up with good.

Despite gender, humans have emotions. Men are still human. They experience similar feelings to their female counterparts, even if men don’t express them as well.

A lot of lying comes with hiding my feelings.  Two weeks ago, I became upset with a friend. I feel like nothing will change unless I speak up about it. Most times people are unaware of such conflict, me included.

But if I admit to being upset or that I’m angry, then it’ll be weak. I’ll be showing someone the real me. I suddenly become exposed and my affections are known.  People will see that I’m giving up my dignity.

But men don’t do this. They must stay strong, never lose their dignity. Maintaining dignity is like Rule No. 1 of the male handbook.  It’s an extreme amount of pressure that I must hold and most times it’s too heavy for me to bare.

So, in the end I didn’t say anything to my friend, and I continue to be upset. I try to search for some loophole where I can keep my dignity and not look sad and let them know I was frustrated. To me it seems like a hopeless search.

I think the only solution to my question is not to care about the opinion of others. Emotions are inevitable. Trying to stop how you feel is like trying to stop a train on the tracks. You can try, but it’s likely you’ll get hit pretty hard. If I don’t care about staying with what people want me to be, then I’ll be me.

If I stop caring  about trying to fit in the mold of a strong male, I will finally be myself. This way I can show people the real person I am, not a fake person. I can express my emotions and not worry about hiding them.

While acting more masculine makes me feel better, it’s not real. It’s some person I made up in my head. I am a large mix of typically  “male” and “female” qualities. If I worry about trying to be something I’m not, I will end up deeper in the fake life I portray.

Trying not to care about another’s judgment is difficult. It’s hard to thrive in a society where what I’m doing is frowned upon by one of my parents. It’s a new challenge. I will commit to not caring about the judgment of others, but this act is much easier said than done.

What do you think about this stigma? Let us know below.

I am a freshman at Rock Bridge High School. I participate in community theater and I watch too many old movies. I also love to write and video.