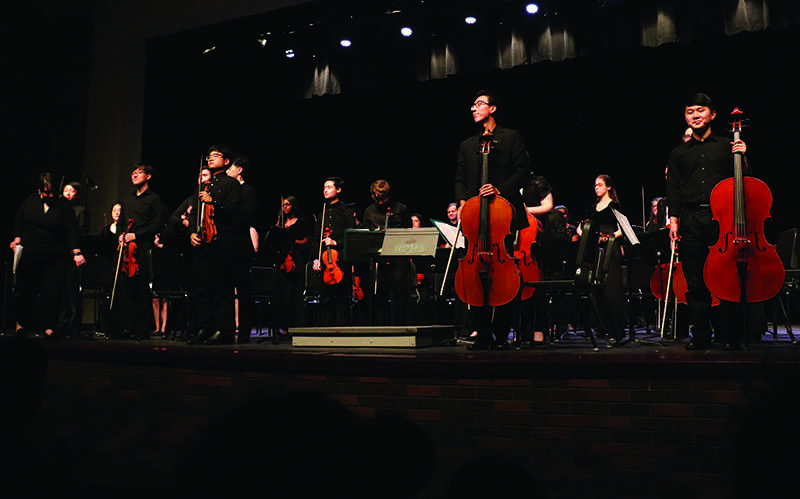 Chamber orchestra takes the stage for their final concert this year. Photo by Lucy Bozian.

Senior Grant Crockett remembers the first time he learned the violin. He was a wide-eyed sixth-grader in a new middle school. After the class learned how to use the bow, his teacher said, “okay, try to play your instrument.”

A cacophony of violin screeches filled the room, with ghastly clashes in pitch and cellos crunching, but Crockett said it improved from there.

“At first, I was bored because the learning process was slow, and I didn’t know how to do anything. Soon after, I came to love this instrument,” Crockett said. “Being in orchestra taught me a lot, including being more patient when learning and how to work on a team. It’ll all end at the May concert, and that makes me sad.”

The final concert of the year was May 7. In RBHS, there are two orchestras. One is called Concert Orchestra, and the other is Chamber Orchestra. An audition is required to play in the Chamber Orchestra. The two ensembles played movements from symphonies and contemporary pieces. Orchestra director Allison Schmidt said it was an emotional concert, as it was the last for the seniors.

“The May concert is a huge deal because it cumulates what we have done this school year,” Schmidt said. “That’s why there is such a variety of pieces. It’s also a celebration of the seniors, and we recognize them. It’s a big concert, and I always look forward to it.”

She also thought seniors had a lot to take away from participating in orchestra in high school.

“Orchestra and music in general teaches people how to work as a unit and listen to each other because that is the only way to make music work,” Schmidt said. “Without communication and listening, the music doesn’t go very well. [They’re] important skills that are also used in their daily life.”

Other seniors think the May concert had a bittersweet ending. Senior Sejoon Jun is the concertmaster of the Chamber Orchestra. Jun has been playing in orchestras for nine years and plans to continue through college.

“It was my last concert, and it’s sad. I didn’t want it to end,” Jun said. “I will miss all of the jokes in the beginning of class with Mrs. Schmidt and playing with the friends I’ve known for four years.”

Senior Zain Ibdah thinks fondly on all that he learned in orchestra.

“This is like a realization of all of the experiences I’ve had and how far I’ve come from the first time I held the violin,” Ibdah said. “It was emotional because I’ve had Mrs. Schmidt every other day for four years.”

The orchestra program has five graduating seniors. They all said they’ll value the relationships made through the program.

“The memories I’ve made really mean a lot to me,” Ibdah said. “They will last for a long time. One of my favorite memories in orchestra is when Pockets [the stage tech specialist at RBHS] was on the ceiling catwalk fixing a light. I was sitting on the floor under him when I heard, ‘Zain, watch out.’ I looked up and was blinded. I couldn’t see him. I said, ‘God, is that you?’ He said, ‘No, I’m Pockets.’”

Crockett also said he will miss the orchestra dearly.

“Playing my violin is so fun, and I will miss that feeling,” Crockett said.” I want to keep on playing through college, but I don’t know. It’ll feel like losing a hobby. This concert is so important to me because it may be my last one.”

Are you planning on doing Orchestra next year? Comment down below.

The debate over air pollution

Sophomore Brandon Kim is a writer for The Rock and Bearing News. He loves to travel and go outside. In has free time, he likes to listen to music, play the violin and read a good book.